A girl so desired across the globe, spends her spare time around the people she loves and her pup. Before modeling playboy was one of her favorite brands. Winning playmate of the year 2017 for Playboy at such an early stage of her career was an important achievement that Stefanie Gurzanski always cherishes. 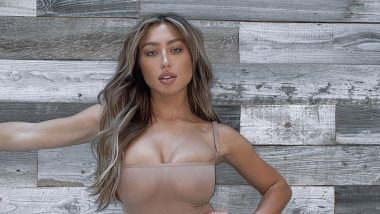 Being successful takes a lot of persistence and burning midnight oil and more than that it takes discipline that few can follow. Stefanie Gurzanski is such a swaying personality that not only has made her name in the modeling industry but guides millions.

Born and brought up in Canada, Stefanie Gurzanski began her modeling career at a very young age. Before modeling, she has tried her hands on many things but nothing seemed to be satisfactory for her as a career choice. So during her high school days, she started modeling and has never looked back since then.

A digital revolution has hit the decade and she was a part of the success story. A coming decade which is predicted to be the decade of influencer, Stefanie Gurzanski is already influencing millions on Instagram. Being real has been the secret for her success story.

At the young age of 17, Stefanie Gurzanski had started modeling. By now she has already worked with massive fashion brands like vogue Elle cosmopolitan. Her foreign looks and stunning figure are the motivation for millions of her followers.

With the rising of social media, many persistent and dedicated towards a healthy and fit life looked towards the authenticity of influencers. With this quest of follows, Stefanie Gurzanski's rise began and it continues to this date. She had tried to reach more public with each passing day and has been rewarded with the love and attention of this generation.

An impulsive shopper, Stefanie Gurzanski never leaves her house without her incense diffuser and silk pillowcase to ensure her comfort where ever she goes.

Stefanie Gurzanski has worked with many photographers and creative people in the industry. But her favorite is someone who has a creative connection with her. Working in public does bring a smile to her face. It's something she finds funny. Watching people’s reactions while she works. At busy places, things get crazy. Waiting for that perfect shot until there is no one else inside the shot with her. It's difficult. Especially in public places and the kind of reaction people are giving.

A girl so desired across the globe, spends her spare time around the people she loves and her pup. Before modeling playboy was one of her favorite brands. Winning playmate of the year 2017 for Playboy at such an early stage of her career was an important achievement that Stefanie Gurzanski always cherishes.

As a model, Stefanie Gurzanski gets goosebumps when she sees her work in magazines. Nothing makes her happier as a model than seeing her work in print. Every event that has provided her with the opportunity to get on print in magazines, she cherishes.

Stefanie Gurzanski is obsessed with good skincare products. As an influencer, she only recommends good skincare products to her followers. One of her favorites is the Skin Cuticles brand which she highly speaks of. Apart from hitting the gym most often, she is mostly at her pilates class. Slow movement exercises to increase core strength and flexibility are her secret to such a striking looking appearance.