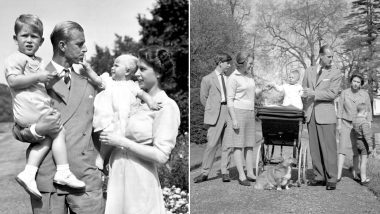 The British Royal Family shared beautiful pictures of Queen Elizabeth and Prince Philip to wish fans on Father’s Day 2020. The black and white photos show Prince Philip with young Prince Charles, Princess Anne, Prince Andrew and Prince Edward along with Queen Elizabeth. People on Twitter reacted on the pictures wishing the family on this day and thanking them for sharing such a beautiful moment with the world. The Father’s Day 2020 celebration is also very special today, for the royals as the Duke of Cambridge, Prince William is celebrating his 38th birthday today, June 21.

In one of the images, the Duke of Edinburg has Prince Charles in his arms while the Queen is holding Anne, who is adorably putting her hand over her father’s mouth. According to reports, the adorable snap was taken in the grounds of Clarence House in 1951. “Wishing you all Happy #FathersDay. Here’s a collection of photographs from the #RoyalArchives of The Duke of Edinburgh with his children,” reads the caption. The Royal Family Shares Childhood Photos and Video of Her Majesty As She Turns an Year Older.

Wishing you all Happy #FathersDay

Here’s a collection of photographs from the #RoyalArchives of The Duke of Edinburgh with his children. pic.twitter.com/Q3RHHoH7Fx

The Father’s Day post has obviously prompted a delighted reaction from royal fans. Prince Charles as well shared two special photos on official Clarence House Twitter and Instagram accounts to mark Father’s Day. The pictures show his childhood pic and another with his two sons Prince Harry and Prince William.

Whether you are a Father, a Dad, a Daddy or a Pa, wishing you a Happy Father’s Day! pic.twitter.com/9Q2AJ7eK3D

Father’s Day 2020 celebration is special to the royals because the Duke of Cambridge has turned a year older. Prince William is spending the day with the Duchess of Cambridge, Kate Middleton and their children, Prince George, Princess Charlotte and Prince Louis at their Norfolk home of Anmer Hall.

(The above story first appeared on LatestLY on Jun 21, 2020 04:06 PM IST. For more news and updates on politics, world, sports, entertainment and lifestyle, log on to our website latestly.com).