So if you're looking for the perfect vacation adventure, look no further! We can guarantee these rainforests will blow your mind away and satisfy your hunger for nature simultaneously! 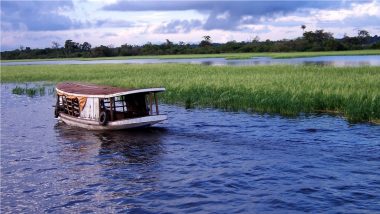 You have probably heard about the Amazon Rainforest in South America, especially in recent years. Widely renowned as 'Lungs of the Earth,' it provides shelter to three million species of plants and animals. But what exactly are rainforests? To put it really simply, tall trees (mostly evergreen), heavy rainfall and warm climates make up a rainforest. Quite obviously, heavy rainfalls were the reason behind the name 'rainforest.'

Here are some of the most popular rainforests around the world. Add these to your list if you want to explore nature on your next vacation! Meghalaya Tourism: 8 Tourist Places to Visit in Meghalaya for Nature Lovers.

The Amazon Rainforest covers much of northwestern Brazil and extends into Colombia, Peru and other South American countries. Nearly two-thirds of the Amazon rainforest is found in Brazil, and it is also nearly a third of the remaining tropical rainforests on Earth. There are an estimated 16,000 tree species and 390 billion individual trees in the Amazon.

At 500 million ac., the Congo Rainforest is the second-largest tropical forest in the world and is larger than the state of Alaska! It spans six countries and contains a quarter of the world's remaining tropical forest. More than 1,000 species of bird can be found here, and the Congo Basin contains the greatest number of mammals, primates, birds, amphibians, fish and swallowtail butterflies in Africa. Monsoon Getaways Near Mumbai: 10 Places You Could Head To For a Perfect Rainy Holiday.

Watch This Interesting Video to Learn About Congo Basin

Get to Know What's In Store For You:

The Kinabalu National Park boasts of a 130 million-year-old nature sanctuary and is home to Mount Kinabalu and the largest flower in the world- the Rafflesia. This rainforest is impressive, with 90 species of lowland mammals, 22 species of montane zone mammals, over 300 bird species and up to 290 types of butterflies. For the trekkers, you might want to attempt the Liwagu Trail—the longest at 5.62km—trekking mostly long the Liwagu River.

The Tongass National Forest is the largest U.S. National Forest at 16.7 million acres and is located in Southeast Alaska. It provides essential habitat for the largest population of Bald Eagles in the world. It is also the Earth's largest remaining temperate rainforest. The Tongass supports abundant fish and wildlife, including all five species of Pacific salmon, brown (grizzly) bears, wolves, Sitka black-tailed deer, Bald Eagles, Northern Goshawks, and Marbled Murrelets.

So if you're looking for the perfect vacation adventure, look no further! We can guarantee these rainforests will blow your mind away and satisfy your hunger for nature simultaneously!

(The above story first appeared on LatestLY on Jul 08, 2021 01:26 PM IST. For more news and updates on politics, world, sports, entertainment and lifestyle, log on to our website latestly.com).