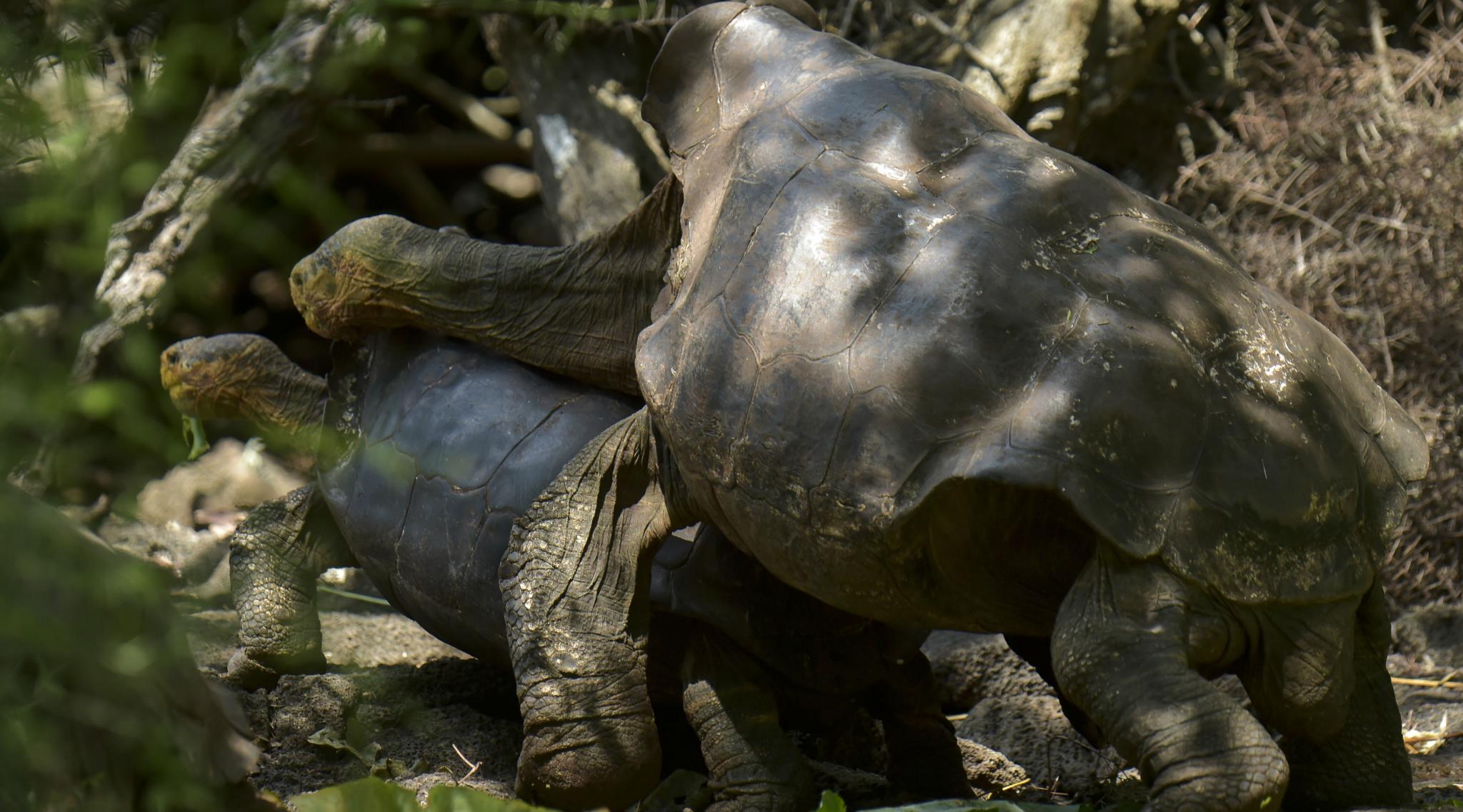 Diego, a tortoise of the endangered Chelonoidis hoodensis subspecies from Espanola Island, mates with a female. (Photo Credits: AFP)

Quito, January 12: Job done, prolific Galapagos giant tortoise Diego is being released back into the wild after being credited by authorities with almost single-handedly saving his species from extinction. The 100-year-old tortoise, who was recruited along with 14 other adults for a captive breeding program, will be returned to his native island of Espanola in March, the Galapagos National Parks service (PNG) said Friday.

"About 1,800 tortoises have been returned to Espanola and now with natural reproduction we have approximately 2,000 tortoises," Jorge Carrion, the park's director, told AFP. "This shows that they are able to grow, they are able to reproduce, they are able to develop," said Carrion. World's Oldest Tortoises: Alagba of Ogbomoso Dead; Here's A List of Other Shelled Animals Who Lived Beyond 100 Years And The Ones Who Continue to Live Past Century.

Diego's contribution to the program on Santa Cruz Island was particularly noteworthy, with park rangers believing him responsible for being the patriarch of at least 40 percent of the 2,000-tortoise population.

Around 50 years ago, there were only two males and 12 females of Diego's species alive on Espanola, and they were too spread out to reproduce. Diego was brought in from California's San Diego Zoo to join the breeding program which was set up in the mid-1960s to save his species, Chelonoidis hoodensis.

The PNG believes he was taken from the Galapagos in the first half of the 20th century by a scientific expedition. Now, Diego is returning to his original home "almost eight decades after being extracted," the park service said, adding that he had lived at the San Diego Zoo for several decades.

"He's contributed a large percentage to the lineage that we are returning to Espanola," said Carrion. "There's a feeling of happiness to have the possibility of returning that tortoise to his natural state." Diego weighs about 80 kilograms (175 pounds), is nearly 90 centimeters (35 inches) long and 1.5 meters (five feet) tall, if he really stretches his legs and neck.

Before being returned to Espanola, tortoises must go through a quarantine period to avoid carrying seeds from plants that are not native to the island.

Ecuador's Galapagos Islands, located in the Pacific Ocean, were made famous by Charles Darwin's studies of their breathtaking biodiversity. Giant Tortoise Helonoidis Phantasticus Believed to Be Extinct for More Than a Century Found in Galapagos Island (See Pictures).

The story of Diego's prowess contrasts sharply with the sad tale of Lonesome George, a different type of Galapagos giant tortoise, who had refused for years to breed in captivity. Hopes for his species, Chelonoidis abingdoni, faded when Lonesome George passed away in 2012 at more than 100 years old.