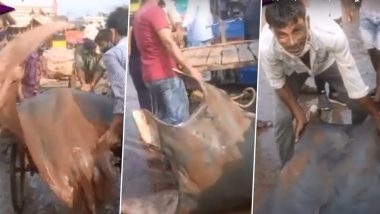 A rare fish weighing around 800kg was caught in the coastal town of Digha in West Bengal on July 27! Locals identified the fish as Chilshankar, a rare fish which is one of the most loved delicacies. The shape of the fish resembles a flying ship and is a type of a stingray.  The fishermen were quite happy about the catch and the fish garnered a lot of attention as people came to catch a glimpse of the rarity. The fish was very heavy and fishermen had to use a rope to pull it to the shore. It weighed around 780kg and was caught in a trawler owned by a man from Orissa. Carcass of Whale Shark, Rare Largest Known Fish Species, Washes Ashore Sea in Tamil Nadu's Rameswaram (View Pics)

As per reports, it was auctioned for Rs 2,100 per kilo at the wholesale marketing, bringing its cost to a total of more than Rs 20 lakh. Even tourists gathered around the fish as people crowded to see it. Catching the fish is a great deal for fishermen as it is very expensive in the market and can change fortune, especially during the lockdown when sales are down. The fishermen then took the fish carried to a van and taken to Mohana Fisher's Association. Rare Huge Sunfish Spotted off the Coast of Mumbles in Wales’ Swansea, Video of World’s Largest Bony Fish Goes Viral.

Ajirul, a local fisherman said, "This is Chilshankar fish. It weighs 800kgs. The market price of this fish is Rs 2100 per kg. We have never seen such a big and rare fish." Other than being a loved dish during the monsoon, the scale of the fish and its oil is used in making medicines. Locals compare catching  Chilshankar to winning a lottery, well why not!

(The above story first appeared on LatestLY on Jul 28, 2020 05:12 PM IST. For more news and updates on politics, world, sports, entertainment and lifestyle, log on to our website latestly.com).