Having realised that it must have been packed under her pile of clothes for nearly 24 hours, Ms Russell found it strange that the tiny gecko managed to survive the long journey without any uneasiness. Strange that the lizard didn't get affected by the woman's weight at all! 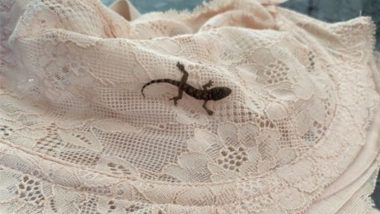 Spotting insects and small creatures running down your clothes can be quite panicky. But what if you find a tiny lizard hidden inside your bra, happened to appear out of nowhere after a long, tiring vacation? Can shock you out of the blue? Well, this happened to a woman named, Lisa Russel from the UK, when she found a living lizard in her lingerie after she returned from her holiday in the Caribbean. The reptile made it to the 4000-mile journey from Barbados to Rotherham. Scary but wow (read: Just How)!

A 47-year-old beautician by profession, Lisa started unpacking her luggage on returning to her home in Rotherham, South Yorkshire on Tuesday. She spotted a tiny speck on one of her bras and shook her lingerie to discover that it was a female lizard lounging in her backpack. "I thought it was a tiny dead creature and then when it moved I started screaming. It is not what you expect to find your bra after a 4,000-mile journey," said Lisa. Viral News: Naked Woman Drives Golf Cart Through Crime Scene After Crashing Armed Standoff in Florida, Arrested.

#UNITEDKINGDOM: A lizard has made a 4,000miles trip from #Barbados to the United Kingdom in a holiday maker's bra. pic.twitter.com/iIEMMwUo9c

Having realised that it must have been packed under her pile of clothes for nearly 24 hours, Ms Russell found it strange that the tiny gecko managed to survive the long journey without any uneasiness. "It must have been happy in its new pad. I am just so shocked! Not only did it survive the journey but also the fact it didn't get squashed as my suitcase was so full when we were returning I had to sit on it to get it zipped up," revealed Lisa. Strange that the lizard didn't get affected by the woman's weight at all!

Lisa called up the Royal Society for the Prevention of Cruelty to Animals (RSPCA) to get a safe stay for the lizard. Inspector Sandra Dransfield arrived to pick up the foreign reptile and named her 'Barbie'. She even treated the lizard with some water before taking her to a safer and healthy environment. "Lisa was quite relaxed about the whole thing and thought it was funny that the gecko had safely made the trans-Atlantic crossing in her bra. Unlike a lot of women the lizard must have found it comfy," said Sandra.

Barbie, the lizard, couldn't be released in the UK because of its non-native identity that could lead to an illegal offence. The RSPCA claimed that as the reptile won't be able to relocate, it will be taken by the specialist keepers to some zoo or a wildlife park where it could reside safely with other animals.

(The above story first appeared on LatestLY on Sep 13, 2021 09:28 AM IST. For more news and updates on politics, world, sports, entertainment and lifestyle, log on to our website latestly.com).