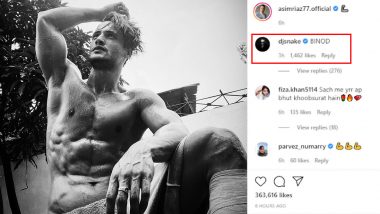 Everyone and everything on the internet in right now Binod. In the last three days, this name is all over social media and especially in the comments section of most creators. Now the craze of Binod has gone international as DJ Snake also couldn't resist participating in this viral trend. The popular French DJ commented Binod on Big Boss 13 second runner-up Asim Riaz's picture. Asim Riaz has posted a series of pictures, flaunting his chiselled abs and hot body but people also cannot miss out on the 'Binod' comment by DJ Snake. Now, fans or rather the Binod Army cannot keep calm to see how far and wide this trend has gone. ‘Call Me Binod,’ Anonymous French Hacker, Elliot Alderson Joins the Funny Memes Trend, Desi Twitterati Wonders if He Has Any ‘Indian Connection’.

It all started when YouTube channel Slayy Point made a video taking a dig on the comments by the Indian audience. Their example of a guy named Binod Tharu writing his own name Binod in the comments blew up so much so, that everyone started writing Binod in the comments. It gave rise to funny memes and jokes on Binod, and how popular it became overnight. If that wasn't all, a Binod song has also been released! And if anyone thought the craze would die out, at least not so soon, as now it has gone international! DJ Snake commented Binod on popular Bigg Boss 13 contestant Asim Riaz photo on Instagram and fans are impressed!

I love that @djsnake follows all the Indian meme trends...😂 https://t.co/nuTVuvvDa0

Look what DJ Snake has commented on Asim's latest post ...😆

Clearly, this is too much to take for some? Who would have thought DJ Snake would be aware of Binod. Asim and Himanshi Khurana's new song "Dil Ko Maine Di Kasam", released yesterday and fans are loving this soothing melody. While, Asim is truly popular on social media, DJ Snake's comment is doing little to take away his limelight.

(The above story first appeared on LatestLY on Aug 11, 2020 06:10 PM IST. For more news and updates on politics, world, sports, entertainment and lifestyle, log on to our website latestly.com).