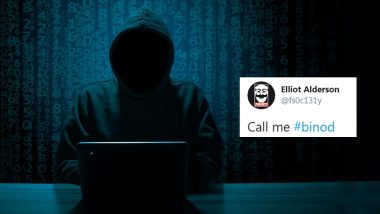 Internet at times, is a strange place. You never know what and how can things go viral, impressing netizens to the core. So, when Binod funny memes began trending on social media, internet users were quick to join the trend, with some scratching their heads over who Binod is. More and more memes on Binod began to surface on the internet, and by now, netizens are pretty much convinced that everyone is Binod. The name seems to have become a fascination with the internet. Anonymous French hacker and internet ‘celebrity,’ Elliot Alderson has logged on this trend. It seems like he has almost ‘revealed’ his identity, after tweeting ‘Call me Binod.’ Desi Twitterati was quick to react, thinking if he has an ‘Indian connection,’ as Alderson joined the bandwagon. Binod Meme Origin Explained: These 11 Binod Memes on Twitter Will Crack You Up After YouTuber Slayy Point Video Takes Dig at Comments Section!

On August 8, the renowned French ethical hacker, Alderson tweeted, ‘Call me #Binod,’ from his official handle. It was only natural to see his tweet triggering widespread laughter on the internet. His followers were baffled as to what he meant. Again, his Indian followers were trying to connect the dots, wondering if the hacker has any Indian origin.

But who is Binod? YouTube channel Slayy Point’s video titled, ‘Why Indian Comments Section is Garbage (BINOD).’ One of the comments that clearly stood out in the now-viral video was ‘Binod,’ and that is how internet users began to make jokes and funny memes on Binod.

Alderson’s tweet on Binod went viral too. Not just that it had triggered hilarious moment on social media, his tweet also gave rise to the speculation among netizens if he had an Indian connection. However, in the follow-up tweets, the French hacker explains about all the ‘Binod’ comments, he has been dealing with on social media.

Alderson Has Any Indian Connection?

Binod returned from France to India by Vande Bharat 😂

Are you Indian or what

Damn this binod has reached France.

Change your name to binod alderson for 2 days😑😂😂😂

This guy is sending me weird messages for 2 years... pic.twitter.com/6iywBgZlsJ

Isn’t it hilarious? While it does not seem like Alderson has any Indian connection, but we cannot stress it much, after all, he is a hacker. Meanwhile, the Binod trend appears to remain on the internet for some more time, unless netizens’ attention is diverted to something else to crack up more jokes.

(The above story first appeared on LatestLY on Aug 11, 2020 08:40 AM IST. For more news and updates on politics, world, sports, entertainment and lifestyle, log on to our website latestly.com).