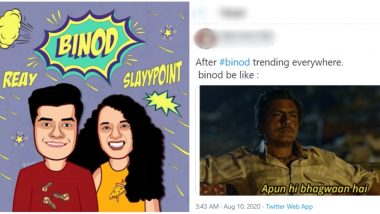 If there is one name that has taken over social media in India is Binod. One random comment from YouTube's comment section has blown up into a viral trend on social media. Everyone is wondering who is Binod and some have joined along in making funny memes on him and writing the name wherever possible. So it wouldn't be wrong to say everyone on the internet became a Binod in the last two days. And now, this character has his own song too! From Slayy Point's dig at the comment section on Binod to a whole new song for this name, the trend is one of the most viral things we have seen this year. Even Mumbai Police joined the Binod meme trend.

It all started when a few weeks ago, YouTube Channel Slayy Point made a video on Indians commenting on videos. They gave an example of a guy named Binod Tharu who wrote his own name in the comment. With that, almost everyone started writing Binod on all videos, even during live streaming of creators, people started commenting Binod. As more and more people wanted to know who is Binod, it grew into a viral trend very soon. So much so, there is a Binod song and the music video has nothing, but just the name. Yes!

Check The Video of Binod Song:

So what is in the song? Nothing just Binod! That pretty much sums up what this trend is all about. Only saying his name, writing his name and commenting Binod. Looks like, it is here to stay for a while. Right after the trend went viral, there are so many YouTube channels with the name Binod Tharu. So now, the real Binod Tharu is probably just basking in the glory of creating one of the most viral trends of 2020, all by commenting his name.

(The above story first appeared on LatestLY on Aug 10, 2020 01:09 PM IST. For more news and updates on politics, world, sports, entertainment and lifestyle, log on to our website latestly.com).