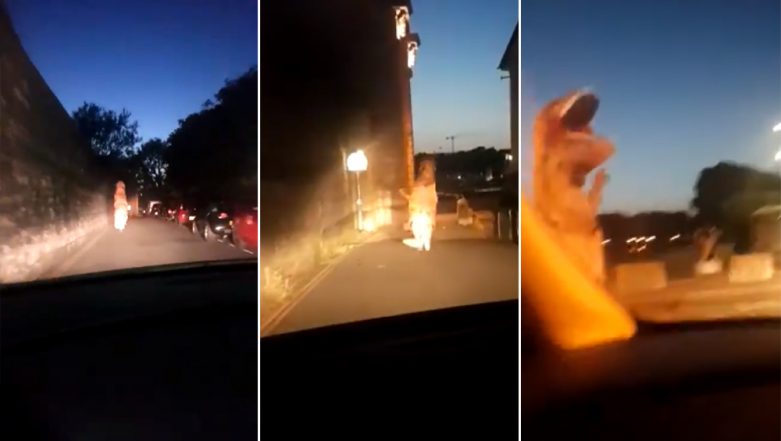 We said it then, we are saying it again, the internet is the best place that one could be. You will never be bored, with something or the other funny moments coming up online. A recent hilarious moment was encountered by a few British Police officers during their late-night shift in Plymouth. On their duty, they chased a “Dinosaur” down the city street and shared the clip online. To what may seem, like a budget Jurassic Park film, is a man in a T-Rex costume. The hilarious video is now making rounds on the internet, with other people joining in the hysteric chase. T-rex ‘Dinosaurs’ Racing on Horse Track Is Making People Laugh.

Captured on the dashcam of the Police car, it is the way, the man in dinosaur costume was running away from the officials. At one point, the fancy dress reveller stops, turns around and opens his jaws at the police car. The officers were impressed by his speed. The Charles Cross Police Team took to Twitter, “Just another late shift in #Plymouth - We can confirm the Doyouthinkhesawus is NOT extinct and they can run real fast! Let’s hear your best ‘Why did the dinosaur cross the road’ jokes please.”

Just another late shift in #Plymouth - We can confirm the Doyouthinkhesawus is NOT extinct and they can run real fast! Let’s hear your best ‘Why did the dinosaur cross the road’ jokes please.... #Doyouthinkhesawus #DinosaurCostume #LateShiftAntics @UKCopHumour @BullshirePolice pic.twitter.com/GUc6Z6aR1A

Netizens Only Had Jokes to Offer

Next time he won't be running 😂 pic.twitter.com/vND5tXDoQt

Thank you for sharing, you just made my day! 😂

Here is my dinosaur joke:

How do you know if there is a dinosaur in your refrigerator?

Why did the dinosaur cross the road?

The reason, as to why the T-Rex dinosaur was running away from the police car is not understood. But the officers surely had a fun moment in their otherwise strict duty. The combination of the oversized head swaying on one side, with zero ability to control it, people in Tyrannosaurus Rex aka, T-Rex costume is the funniest sight to behold. And this one, was nothing less.