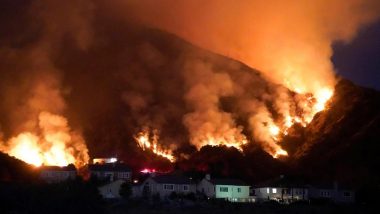 Wildfires are burning at historic speed and scale across the American west, engulfing almost five million across of land across states like California, Oregon and Washington, since early August, 2020. The situation is very bad. It has impacted on the lives severely. Now Yosemite National Park in California’s Sierra Nevada Mountains is closed to all visitors because of the wildfire smoke that created hazardous air quality. It is unfortunate how the beauty of the national park could not escape the effects of the wildfires. The National Park Service announced its decision to close on its official page. The officials added that the air quality in the park is projected to be unhealthy to hazardous range over the coming days. California Wildfires: August Complex Fire Is Now Largest in the State’s History, Know Details of Six Raging Wildfires That Burned in 2020.

“All park entrance stations and roads will close beginning at 5 p.m., Thursday, September 17, 2020,” the park service announced in a statement, as quoted by media reports. “With air quality projected to be in the unhealthy to hazardous range over the next several days, the park anticipates the closure to be in effect at least throughout the weekend,” the statement adds. The officials will continue to assess the smoke impacts, and nearby fire activity and will reopen the park when it is safe for visitors and employees to return to the park.

Yosemite’s closure comes later than other national parks in California. The park’s largest resort, Mariposa Grove and Curry Village were previously closed by the officials earlier in September, 2020 as smoke from the nearby Creek Fire reached unhealthy levels. Firenado in California! Viral Video of Wildfires Resulting in Tornado Looks Terrifying, Know What Causes a Fire Whirl or Fire Devil.

This is not the first time Yosemite has been closed this year. The park closed on March 20 because of the coronavirus pandemic and reopened in phases on June 11. And now it is the wildfires. The closures have come at the busiest part of the tourist season. In 2018, Yosemite closed to tourists for 12 days because of the hazardously smoky air.

(The above story first appeared on LatestLY on Sep 18, 2020 12:49 PM IST. For more news and updates on politics, world, sports, entertainment and lifestyle, log on to our website latestly.com).