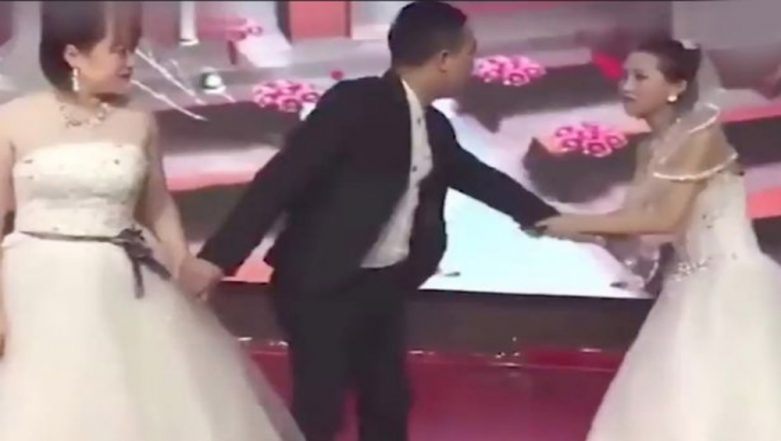 If you are an ardent Bollywood film lover, you have seen enough of wedding plot twist with a former lover landing at the wedding and creating a scene. But such a filmy scene took reality in China when a groom's ex-lover came to stage dressed as bride and begged for forgiveness. The bride meanwhile looked stunned at the scene that was happening on her wedding stage. At one point both the women were fighting for 'their man.' The entire dramatic footage was caught on video and is now going viral on social media. Cute Cat Riding on the Train of a Chinese Bride’s Wedding Dress is Winning Hearts (Watch Video).

The couple was just married and when the groom was supposed to kiss his newly-wed wife, the ex-lover crashed the stage dressed in a white wedding gown and a veil. The happy, romantic moment quickly turned into a dramatic scene when the ex-lover started begging to the groom saying, "It was my fault." She prompted his wife to get off the stage and tugged on the groom's arm. She was screaming and became hysterical. The husband held on his wife's hand, while his ex-lover continued to beg kneeling and crying on the stage. The bride was clearly annoyed and left the stage, with her husband immediately following. This Viral Video From Indian Wedding Will Make You Go 'WTF!'

The couple reportedly had a break-up because of their differing personalities. The bride and groom were both shocked at the uninvited guest, who stole their romantic moment. The husband was happy with his new chapter and left with his wife, while the spurned lover continued to cry at the venue.