The price of Doge soared, and reportedly, over 12 million USD worth of Doge was traded in the past 24 hours. As the price surged, so did the Dogecoin funny memes and jokes. The reactions on Dogecoin’s increase in value in just a day are hilarious AF and everywhere on Twitter. 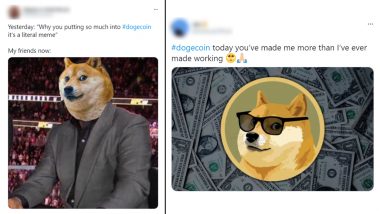 What is happening? While we are still figuring out the freakish GameStop stock rise, the short squeeze mania around Reddit-fueled stocks has extended to the cryptocurrency world. DOGE, which was started as a joke in 2013, is now the 10th most valuable cryptocurrency by market value, just behind the Bitcoin Cash and ahead of BNB. The price of Doge soared, and reportedly, over 12 million USD worth of Doge was traded in the past 24 hours. It is unbelievable to netizens! As the price soared, so did the Dogecoin funny memes and jokes. The reactions on Dogecoin’s increase in value in just a day are hilarious AF and everywhere on Twitter.

The world saw the power of the Reddit community, which caused the GameStop stock to take off. The video game retailer’s stock surged to an all-time high of nearly 373 USD on January 27. And now, it is the Doge meme! Dogecoin was created in 2013 based on the popular ‘doge’ meme, which involved a Shiba Inu dog. The logo of dogecoin is Shiba Inu. It was started as a joke, but eventually found a community. Its resurgence in the last few days has been down to enthusiasm from reportedly a Reddit group called SatoshiStreetBets.

According to reports, the price of Doge rose to an all-time high of $0,082 per Messari, before settling down to $0.073, up 822% in 24 hours. It certainly captured the imagination of the crypto pack and beyond. Tesla CEO Elon Musk tweeted a picture of Vogue magazine cover, which featured a 'Dogue.' Users on Twitter and Reddit took that to mean that he was throwing his support behind the doge rally.

People are going crazy! Hilarious Dogecoin funny memes and jokes are all over the social media, and you must take a look.

Yesterday: “Why you putting so much into #dogecoin it’s a literal meme”

Me checking my #dogecoin every five minutes pic.twitter.com/DVY7ocVrNE

Me: This morning investing in #dogecoin at $.02 vs Me: 10 hours later holding strong at $.07 pic.twitter.com/ydeXZIYInl

Me watching the #Dogecoin chart continuing to rise. pic.twitter.com/lINU0ZPtCw

Raise your hand if you made money today on #dogecoin pic.twitter.com/mE9853ga5F

If #dogecoin hits $1, I'm telling my kids this was Neil Armstrong. pic.twitter.com/CCjTmxaYvk

#dogecoin coiling so hard right now. Get ready for our flight to MARS BABY! pic.twitter.com/61ewgfLyxd

Me checking every 5 minutes #dogecoin pic.twitter.com/WiP6Z815p9

Using this to buy my lunch tomorrow #dogecoin pic.twitter.com/elgnUm8i31

We are going to break the Stock Market! #dogecoin #ToTheMoon 🚀🚀🚀📈📈📈 pic.twitter.com/hy5jQQPdHp

Me in 2 weeks after I sell #dogecoin at $2 a coin pic.twitter.com/L6Ci0NSvzM

What a wild day... Raised from 1 cent to 7 cent.... TO THE MOON #dogecoin pic.twitter.com/D02PAANJsn

Me looking at my phone all day #dogecoin pic.twitter.com/R9xLcgBST1

#dogecoin today you’ve made me more than I’ve ever made working 🥺🙏🏼 pic.twitter.com/LVS71Lm4dC

The coin never received as much love as its rivals in the crypto-verse. But users on Reddit forum ensured it set off by promoting the cryptocurrency in an attempt to replicate the astonishing gains for GameStop and other highly shorted stocks.

(The above story first appeared on LatestLY on Jan 29, 2021 11:15 AM IST. For more news and updates on politics, world, sports, entertainment and lifestyle, log on to our website latestly.com).