The Wall Street financial market chaos is evident, but meme makers are having their own time celebrating the absurdity of the situation. GameStop stock funny memes, Reddit jokes, Stonks meme man, and more, Tweeple is laughing at the hilarious reactions. 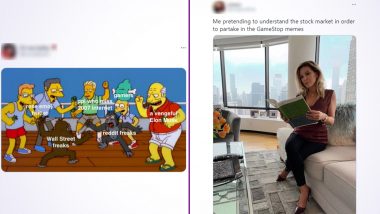 The coronavirus pandemic has hit the market hard, and GameStop was not left untouched. The videogame retailer was already seeing slow business and reportedly planned to close about 450 stores this year. Yet, surprisingly, GameStop has become one of the hottest stock of the year. Credits? An army of small investors! Who would have thought a Reddit community could cause the stock to take off? According to reports, the video game retailer’s stock surged to an all-time high of nearly 373 USD on January 27, has regularly been below 20 USD per share in 2021. The Wall Street financial market chaos is evident, but meme makers are having their own time celebrating the absurdity of the situation. GameStop stock funny memes, Reddit jokes, Stonks meme man, and more, Tweeple is laughing at the hilarious reactions. The funny memes are priceless!

Small investors are surely giving quite a tough competition to professionals. WallStreetBets grew by more than 500,000 users in the past three days causing short sales and short squeezes, driving the price of GameStop even higher in the process. Although experts have warned it won’t last, the stock is still hitting new highs. Because of the “newfound interest,” the WallStreetBets subreddit was briefly taken private by its moderators. But soon it was back! Elon Musk Tweets 'Use Signal'; Followers Get a Wrong 'Signal', Subscribe To Unrelated Company's Stock with Similar Name, Giving It 1,100% Surge.

It’s like a group of Reddit users decided to play the market and push up the stock value of GameStop, taking on Wall Street short-sellers in the process. And the plan worked! A Twitter user joked, “Storm the stock market, they can’t GameStop us all,” much familiar to Storm Area 51, remember? The situation currently is wild, and as expected jokes and memes surrounding the GameStop stock surged, and they are hilarious AF!

Storm the stock market, they can’t GameStop us all

Me pretending to understand the stock market in order to partake in the GameStop memes pic.twitter.com/56bLVdALy6

Every time I open this app pic.twitter.com/TXN8lY993z

As per the latest reports, India’s day traders are strapping in too for the GameStop ride that has taken the equity markets by storm. However, some experts are of the opinion that the stock price will likely drop once the hullabaloo dies down.

(The above story first appeared on LatestLY on Jan 28, 2021 12:02 PM IST. For more news and updates on politics, world, sports, entertainment and lifestyle, log on to our website latestly.com).