Thalapathy Vijay's new Master posters suggested that the film is heading for a digital premiere on Amazon Prime. However, we can assure you that these posters are fake and the decision to come on OTT hasn't been taken by the makers yet. 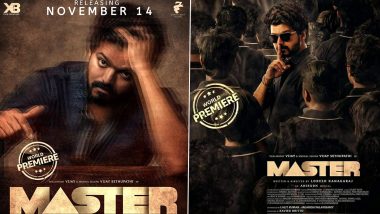 Is Thalapathy Vijay's next big release heading the OTT way? Titled Master, the film also stars Vijay Sethupathi and Malavika Mohanan in the lead role and was earlier slated for an April 2020 release. However, the ongoing COVID-19 pandemic disrupted all its release plans and the makers are still unsure about announcing its new release dates. With theatre chains and multiplexes still being shut and with no clarity on their reopening dates, many small, medium and big-budget movies are going the OTT way and there are rumours if Master will be next. Thalapathy Vijay’s Master to Release on OTT Platform Only after Its Theatrical Debut (Read Details).

Recently Thalapathy Vijay's Master posters suggesting its premiere on Amazon Prime went viral on the internet. The posters suggested the film will ditch its theatrical release and head to the OTT platform directly. However, LatestLY fact check team inspected the posters and realised that they are fake. Neither the producers nor the digital platform has shared any such poster confirming its OTT premiere and hence it suffices to say that Master is still waiting for its theatre window. Master Director Lokesh Kanagaraj Reveals Why Thalapathy Vijay Fans Won't Get to Hear Any Update about His Next Anytime Soon.

Check Out the Fake Posters

Also, interesting thing to note here is that one of the posters mentioned November 14 as the film's premiere date on Amazon Prime while another one suggested October 30. The discrepancy in its release date itself prooves that these are fake posters and Vijay fans need not worry about it.

Recently, Suriya's Soorarai Pottru was confirmed having a digital premiere on Amazon Prime and the news could have motivated others to think if Vijay's Master will ultimately bite the dust and skip its theatrical release altogether.

No, it's not. Master makers are yet to decide if they want to skip its theatrical release and haven't announced their decision yet.

(The above story first appeared on LatestLY on Aug 24, 2020 09:17 AM IST. For more news and updates on politics, world, sports, entertainment and lifestyle, log on to our website latestly.com).