NO, Virat Kohli and Anushka Sharma are Not Getting Divorced! Stop Spreading Fake News and #VirushkaDivorce Trend ASAP

The trend started after an old article published by a leading news publication surfaced that reported the split of the couple even before their wedding. 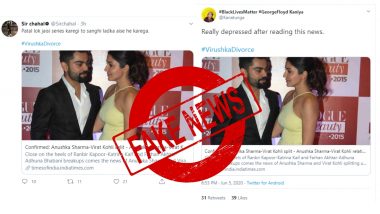 Virat Kohli and Anushka Sharma along with others are witnessing a bizarre trend. Some of them are making #VirushkaDivorce viral on Twitter. The hashtag came up after an old article published by a leading news publication surfaced that reported the split of the couple even before their wedding. However, the netizens are using this article to fuel this trend which obviously not the case. In case you did not hear it loud and clear: NO, They are not getting divorced and are happily married. Virat Kohli Should Divorce Anushka Sharma For Producing Paatal Lok, Demands BJP MLA Nandkishor Gurjar; Files Sedition Case Against Her.

It all started when Anushka backed series Paatal Lok was pulled up by a few people for its content. BJP MLA Nandkishore Gurjar not just slammed the series but even went ahead making demands like Virat should divorce Anushka! Even though none of the makers cared to respond, this weird trend caught up pace on social media. A twitter user also shared the original date of the gossip piece published by the publication that goes back to February 9, 2016.

Take a Fact Check! It Is Clearly an Old Article

The cricketer and the Bollywood actress got married on 11 December 2017 in a beautiful ceremony held in Tuscany. Since then, they are just getting stronger as a couple, shelling out serious #couplegoals. As of now, "Confirmed: Anushka Sharma-Virat Kohli split" this article has not been taken down by the media house. However, we know that Virushka are happy in their own paradise and we wish them beautiful ever-lasting happy marriage as well!

Virat and Anushka Are Not Getting Divorced, Article That Surfaced Is From 2016.

(The above story first appeared on LatestLY on Jun 05, 2020 10:31 PM IST. For more news and updates on politics, world, sports, entertainment and lifestyle, log on to our website latestly.com).