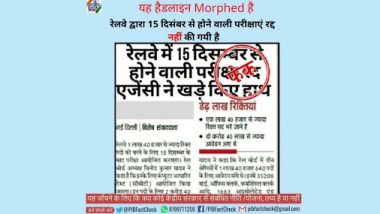 New Delhi, September 21: A viral post is doing rounds on social media platforms claiming that the RRB Group D Exam 2020 scheduled by the Indian Railways from December 15 have been cancelled. The exam will be conducted for the recruitment of 1.5 lakh posts in Indian railways. The misleading news report quotes Railway Board Chairman Vinod Kumar Yadav saying that as the exams stand cancelled, a computer based test (CBT) will be held online for all the aspirants. The claim states: 'In a newspaper headline it is being claimed that the examinations conducted by the Railways from December 15 for the recruitment of 1.5 lakh posts have been canceled'. Recruitments for Government Posts Halted in India? PIB Fact Check Refutes Claims Going Viral on Social Media, Reveals Truth.

Several such fake rumours have been widely circulated on social media platforms including Facebook, Twitter and WhatsApp, which spread panic and confusion among people. At a time when the country is battling the COVID-19 pandemic, the government has time and again warned people of such misleading post and have urged them not to fall a prey to such fake news and visit the official government websites for authentic information.

In a post, is being claimed that the examinations scheduled by the Railways from December 15 for the recruitment of 1.5 lakh posts have been canceled.

PIB Fact Check reveals that this headline is morphed and the news is fake as no such announcement has been made by the Railway Ministry.

(The above story first appeared on LatestLY on Sep 21, 2020 05:50 PM IST. For more news and updates on politics, world, sports, entertainment and lifestyle, log on to our website latestly.com).