Taj Mahal and 99 Other Heritage Sites in India To Be Given on Lease by Govt? PIB Fact Check Reveals Truth Behind Fake Social Media Post 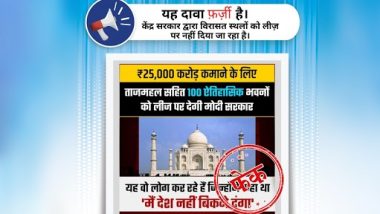 Dismissing the fake claims, a fact-check by the Press Information Bureau (PIB) stated that all the claims made in the social media report are fake and baseless. It added saying that the government has not made any such announcement to lease the heritage sites in India. "This claim fake as the Ministry of Culture has not taken any such decision to lease heritage sites in the country", the fact check stated. NITI Aayog Making You Richer by Offering Opportunities To Earn Up to Rs 30,000 Per Day? PIB Fact Check Reveals Truth Behind Fake Text Message.

Fake news is being spread on social media like wildfire ever since the outbreak of the coronavirus pandemic. In a bid to curb the spread of misinformation and fake news, the government has taken up several initiatives, one of which is doing a fact check of the fake and misleading information on digital platforms. The government has time and again advised people not to believe in such fake news and rumours and check the official websites for any such announcements.

A social media post has claimed that 100 heritage sites, including the Taj Mahal, will be given on lease by the government.

A fact check by PIB stated that the Ministry of Culture has not taken any such decision to lease heritage sites.

(The above story first appeared on LatestLY on Apr 05, 2021 01:17 PM IST. For more news and updates on politics, world, sports, entertainment and lifestyle, log on to our website latestly.com).