A Filipino couple located just 20 kms away from the spot decided to carry on with their wedding ceremony. The risk, however, favoured them well as they got some of the most stunning wedding photos, with the rising smoke and ash clouds in the background. 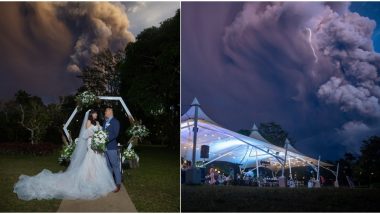 The people around Manila in the Philippines prayed for the safety of everyone as Taal volcano erupted spewing out huge smoke and ash on January 12. But a Filipino couple located just 20 kms away from the spot decided to carry on with their wedding ceremony. The risk, however, favoured them well as they got some of the most stunning wedding photos, with the rising smoke and ash clouds in the background. These pictures have been shared on Facebook and needless to say they are going viral. Taal Volcano Erupts in Philippines, Terrifying Pics and Videos of Smoke and Ash Clouds Go Viral.

The couple named Chino Vaflor and Kat Palomar were set to get married at Savanna Farm by Solange in the town of Alfonso, about 20 kms from the Taal volcano. They noticed some unusual activity from the Taal Volcano but decided to go through with the ceremonies, also preparing in case the situation got worse. Meanwhile, their wedding photographer, Randolf Evan was clicking pictures of the couple and chanced upon the perfect opportunity of nature's stunning display as his background. In one of the pictures of their wedding reception has a lightning strike through the smoky clouds with the venue lit up in decorations. The pictures are stunning no doubt and when Randolf shared it on his Facebook page, they went viral. Illinois Couple Goes Viral After Their Pinterest-Inspired Engagement Photoshoot Fails! View Funny Pics.

Check The Wedding Photos of Couple Who Got Married During Taal Volcano:

Talking about taking these pictures Randalf was quoted in a report, "We pushed through, thinking it might not escalate, but made sure to monitor what was happening via social media." He mentioned that not everything went as smooth as the reception had to be halted when the ash began to fall and mud started settling at the venue. The couple luckily had taken their vows and even performed their dance before the volcanic activity had an effect in the region. It was indeed a memorable day for the couple and the pictures would always remain a proof to that.

(The above story first appeared on LatestLY on Jan 14, 2020 12:15 PM IST. For more news and updates on politics, world, sports, entertainment and lifestyle, log on to our website latestly.com).