John Walker As Captain America Funny Memes and Jokes Go Viral on the Internet, Marvel Fans Aren’t Impressed With Wyatt Russell at The Falcon and the Winter Soldier

People were quick to pick up on Walker’s vibes, and soon internet was flooded with funny memes and jokes. Clearly, Marvel fans are not really impressed with the new Cap. 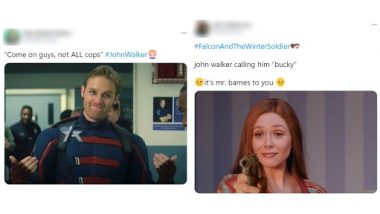 After the hit WandaVision, Marvel fans were eagerly waiting for The Falcon and The Winter Soldier. With the show already streaming on Disney+, fans have a lot of reactions; especially now they have a character they love to hate: John Walker, aka the new Captain America, played by Wyatt Russell. When he made his debut as the new Captain America, audiences, as well as Sam and Bucky, wondered the same thing—who is this guy, and what is he doing with Cap’s shield? People were quick to pick up on Walker’s vibes, and soon internet was flooded with funny memes and jokes. Clearly, Marvel fans are not really impressed with the new Cap. In fact, there is this one scene from the recent episode that made a hilarious meme template.

Walker is incredibly charming for just about everyone on the show except for Sam and Bucky, and of course, the audience right now. All throughout the first episode, the show has been teasing viewers about whether Sam would wield Cap’s shield. After all, it was gifted to Sam by the man himself during the end of Avengers: Endgame. John Walker’s debut in the show is an interesting turn of events, and Marvel fans continue to flood Twitter with funny memes and jokes. In addition, WandaVision’s success among fans also drew funny comparisons.

It's Mr Barnes For You!

😐it’s mr. barnes to you 😐 pic.twitter.com/8OafDI0imy

Even Tony Stark Is Pissed!

me every time john walker referred to himself as captain america pic.twitter.com/dm2ywUrwHv

Despite the jokes and the jarring nature of the twist, some people are excited to see what’s in store with him. He is, after all, a complicated guy, extremely competent and got an impressive military background.

(The above story first appeared on LatestLY on Apr 02, 2021 11:37 AM IST. For more news and updates on politics, world, sports, entertainment and lifestyle, log on to our website latestly.com).