Since this is the release week of The Falcon and the Winter Soldier, the fanfare will be high and fans from everywhere around the world will come on social media and start writing their fan theories. So here are the 5 best ones that we found on the internet. Read on. 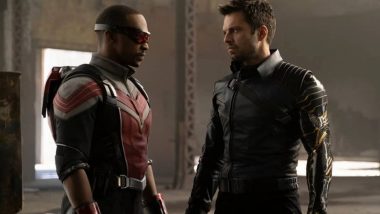 The 19th fans finally get another dosage of the marvel cinematic universe in the form of The Falcon and The Winter Soldier. Hot off the heels of WandaVision, this is the second Disney plus series that Marvel will be launching. Set 6 months after Avengers: Endgame, the show follows Sam Wilson as he has passed down the shield of Captain America by Steve Rogers and deals with the implications of being the new Captain America. The Falcon And The Winter Soldier Final Trailer: Anthony Mackie, Sebastian Stan’s Action-Packed Marvel Series Looks Promising (Watch Video).

The show also follows Bucky Barnes aka The Winter Soldier and how he is going to deal with his past trauma. Both of them have to come together to fight a new threat of villains. Of course, since this is the release week of the show, the fanfare will be high and fans from everywhere around the world will come on social media and start writing their fan theories. So here are the 5 best ones that we found on the internet. War Machine To Appear in The Falcon and the Winter Soldier; Don Cheadle Confirms His Involvement in Marvel’s Disney+ Series.

The Death of Steve Rogers

This is a no brainer considering the last we saw of Steve in Avengers: Endgame, he was a pretty old man almost edging his days as he couldn’t fight any more. So there is a high chance that we might see his funeral in the show especially considering the fact that we see Sam in a funeral setting in one of the trailers.

Bucky still possesses the trigger words that made him go on a rampage in his earlier Hydra days, so it isn’t that far off to think that he might be mind-controlled again in the show. Plus, Zemo is supposed to be one of the big baddies of the show and he already knows the trigger words considering he used them in Captain America: Civil War, so anything can happen. The Falcon And The Winter Soldier: Trailer Of Anthony Mackie, Sebastian Stan’s Show Premieres During Super Bowl 2021, To Debut On Disney+ From March 19 (Watch Video).

John Walker Turning Out to Be a Villain

A high ranking member of the military and the U.S. Government’s first choice to become Captain America. He believes that he is a better embodiment of American values than Steve Roger’s ever was. In the comics, he does go on to become a villain so this theory really shouldn’t be that far off.

Zemo Fighting Alongside our Heroes

This should be a no brainer for everyone who reads comics because Sam of course goes on to take the mantle of Captain America. So if John Walker does turn out to be a villain, Sam might pick the shield up and become Captain America by the end of the show which would be a great character arc for him.

The Falcon and The Winter Soldier drops in India on 19th March and is exclusively going to be streamed on Disney Plus Hotstar. Stay tuned!

(The above story first appeared on LatestLY on Mar 17, 2021 07:41 PM IST. For more news and updates on politics, world, sports, entertainment and lifestyle, log on to our website latestly.com).