Twitter users have rightly pointed out why the poster (and the film name) has been problematic, particularly in the way they treated the subject of mental health. 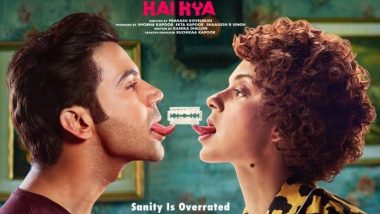 The motion poster for the Kangna Ranaut starrer Mental Hai Kya seems like a winner ever since it was dropped on Wednesday. It features Rajkumar Rao and Kangna balancing a razor blade on their tongues with an accompanying tweet that clearly a play on words: “Get ready for craziness that cuts through.” The slogan of the movie reads: “Sanity is overrated.” Twitter didn’t waste time to give out their verdict on the rather zany-looking poster. While most of them were intrigued, a few others were rightly pointed out why the poster (and the film name) has been problematic, particularly in the way they treated the subject of mental health.  It's Kangana Ranaut v/s Shahid Kapoor as Mental Hai Kya Will Lock Horns with Kabir Singh on June 21, 2019.

Most of the film’s creatives, which started doing the rounds in 2018 itself, are centred on the “mental” theme. The film leads have been depicted as “two mentals” doing “crazy” things such as flipping the bird at the camera, looking crosseyed, putting out a cigarette on the forehead while smiling, lying in a chalk outline while sucking on a lollypop, etc. Why, you ask? Because that’s clearly what “mentals” do according to the makers of the film.  Mental Hai Kya: Kangana Ranaut and Rajkummar Rao Starrer Gets a Quirky New Poster, Movie to Release on June 21.

Twitter was quick to point out that if the film touches upon mental health, will such an irresponsible representation of “mental” people help? Here are some of the tweets.

#MentalHaiKya is a really bad title for a film. sanity is not overrated, and a person having mental health issues is not meant for your jokes and movie titles.

People with real mental health issues are struggling to get treatment, because of the stigma with words like ‘MENTAL’, ‘PSYCHO’. It is highly insensitive to have title like #MentalHaiKya I humbly request to change the title @RajkummarRao #KanganaRanaut

The word “mental” in colloquial usage has been used to describe people who have mental health issues. One of the tweets rightly points out that a layperson may not be able to differentiate between “mental” and “mentally ill,” which does little to help dispel mental health stigma. Another one also expresses concerns over the images of self-mutilation by the actors, which implies that self-harm is cool.

The Hindi film industry has only recently started dealing with topics such as depression, anxiety and suicide with sensitivity. Previously, Bollywood has had a poor record of dealing with this topic and anyone with a mental health problem was categorised as “pagal.” (Remember Rudraksh?)

If Mental Hai Kya has dared to tinker with the topic of mental health, they’ve clearly started off on the wrong foot. With labels like “mental,” “crazy,” “psycho” and “weird” used in the motion poster, the makers of the film are promoting the notion that people with mental health problems are almost always deranged and need to be feared.

Given that Mental Hai Kya has a stellar star cast and an award-winning director, there’s a possibility that we are judging the movie too soon. Let’s hope that a good storyline can absolve the film from its crass name and motion poster.

(The above story first appeared on LatestLY on Apr 17, 2019 06:31 PM IST. For more news and updates on politics, world, sports, entertainment and lifestyle, log on to our website latestly.com).