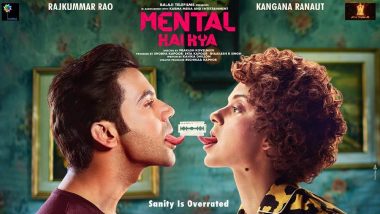 When the versatile young age breakthrough actor and the bold and talented actress come together, the results are expected to be insanely mind-blowing. And this one already has Mental in its name, so we are not even making this up! Rajkummar Rao and Kangana Ranaut starrer Mental Hai Kya’s new poster is unveiled now and it appears to be crazy and scary at the same time. The movie has been stirring anticipation and excitement among the masses, ever since the movie went to the floors. Kangana Ranaut's Sister Rangoli Busts Rumours of Creative Differences with Ekta Kapoor on the Sets of Mental Hai Kya.

The Stree actor took to his social media handle to share the new poster from the film. He wrote, “Madness has made its cut! Catch Mental Hai Kya in theatres on 21st June 2019 #MentalHaiKya#MentalHaiKyaOn21stJune @team_kangana_ranaut@ektaravikapoor @ruchikaakapoor @shaaileshrsingh@prakashkovelamudi @kanika.d”

Have a look at the new poster:

As the name suggests, the movie is based on the mental health issues and previously in an interview, Kangana had even hinted her character saying that one can never tell if she’s hallucinating or things are happening for real. Kangana Ranaut Reveals Details About Her Upcoming Directorial Film and No It Is Not Going to Be Her Biopic!

Helmed by Prakash Kovelamudi, the movie is bankrolled by Ekta Kapoor. The entertaining thriller was initially slated to release on February 22, then it was decided on March 29, and now finally the movie will hit the theatres on June 21. Mental Hai Kya celebrates the imperfections and the crazy within us and shouts out ‘Sanity is overrated’.

(The above story first appeared on LatestLY on Apr 17, 2019 10:21 AM IST. For more news and updates on politics, world, sports, entertainment and lifestyle, log on to our website latestly.com).