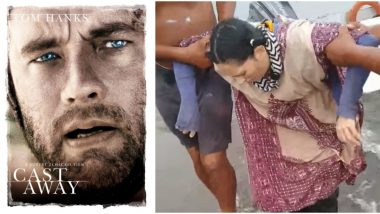 Story of a Colombian woman who went missing two years ago and is found alive at sea has sparked various theories. Angelica Gaitan was spotted floating alive at the sea. The footage of the rescue of a 46-year-old Colombian woman has now gone viral on social media by Roland Visbal, floating 1.2 miles off Puerto Colombia. Gaitan was found by fisherman Rolando Visbal and his friend around two miles away from the shore of Puerto Colombia on Saturday. As the story went viral, people were reminded of the 2000 Hollywood movie Cast Away storyline. And soon, people were reminded of more such incidents that resembled the movie' story which will surely make Tom Hanks proud. In the movie, after a deadly plane crash, Chuck Nolan finds himself on a desolate island. With no way to escape, he finds various ways to survive in his new home. Miracle! Indonesian Woman Found Alive on the Same Beach Where She Went Missing One & Half Years Ago.

Video of the Colombian woman's dramatic rescue has gone viral on social media platforms. He initially mistook Gaitan for a piece of driftwood, but when she raised her hands to signal for help, that's when they realised. She was found around 6 AM on Saturday. When they found her, she was exhausted and suffering from hypothermia after staying afloat for more than eight hours. Mystery Sea Creature Washes Ashore Canterbury Beach in New Zealand.

Real-life Robinson Crusoe was likely a Scottish man by the name of Alexander Selkirk, who lived on a deserted island for four years due to a shipwreck. Similarly, in October 1704, Selkirk was on the crew of a ship called St. George when it stopped at the archipelago of Juan Fernandez, west of Chile. Selkirk thought the ship was in bad shape and decided he better be on Juan Fernandez than on in a vessel. The captain left him with some clothing, a musket, some tools, a Bible and tobacco. He first read his Bible and expected a ship to come, but four years and four months later a friendly ship finally crossed his path. Today, the island he lived on has been renamed, Robinson Crusoe. A nearby island has been christened Alexander Selkirk.

Thomas Francis Neale wanted to be on the beach on Rarotonga, the largest island in the Cook Islands in October 1952. A boat passing by Suwarrow Island in the South Pacific agreed to drop him. The island had been uninhabited since WWII but people had left chickens and pigs. Neale began hunting and eat the pigs, and domesticate the chickens. He was got along well until May 1954 when he hurt his back and took a ride to Rarotonga, the largest Cook Island for medical attention. He then married and had two kids, but kept dreaming of his island. He returned to the island in 1960. He left and again returned in 1967 and lasted 10 years. In 1977, he was found ill by a yacht and took him back to Rarotonga. He later died of stomach cancer eight months later. Eerie! Seattle Teens Find Human Remains During Tiktok #randonautchallenge That Sees Netizens Exploring New Places.

A Native American woman believed to be Juana Maria is known in history as the Lone Woman of San Nicolas Island. She belonged to the Nicoleño tribe. In 1835, when Russian otter killers invaded San Nicolas Island and slaughtered most of the Nicoleño people, missionaries took the remaining tribespeople with them to live at the San Gabriel Mission in California. In 1853, a sea otter hunter named George Nidever found her in a hut made of whale bones. She was taken to the Santa Barbara Mission and eventually, Nidever brought her home to live with him and his wife. But just seven weeks later she contracted dysentery and died.

The fishermen are being praised for bringing the survivor to life. She was initially looked after by kind locals before being taken to the hospital. She cried as people tried to record her on camera. Gaitan's first words on being rescued by Visbal and his friends were, "I was born again, God did not want me to die." Gaitan said that she decided to run away from home in 2018 due to domestic abuse from her ex-husband. Russia's 'Spy' Beluga Whale Returns iPhone to Woman Who Dropped It in the Sea, Video Goes Viral.

She had approached the police to register complaints, but the cops failed to address her concerns. In September 2018, she ran away from home and moved around the streets for six months before finding a place to stay in the city centre. One day she decided to leave everything and jump into the sea, but does not remember anything after that.

(The above story first appeared on LatestLY on Sep 30, 2020 08:02 PM IST. For more news and updates on politics, world, sports, entertainment and lifestyle, log on to our website latestly.com).