Netflix's Indian Matchmaking: Who is Sima Taparia? All You Need to Know About the Mumbai-Based Matchmaker Who Has Become The New Viral Sensation

The reality series follows her meeting up with bachelors and bachelorettes and setting them up according to their preferences. The show has received a lot of backlash for pushing regressive ideas in the name of Indian culture. 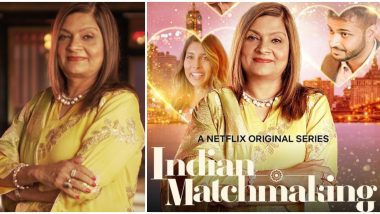 Sima Taparia is one name that you must have come across on social media a lot especially in the past few days. Wondering why this Indian lady is making the news? Well, she's the face of the latest Netflix original, Indian Matchmaking that recently released on the streaming platform. For the uninitiated, Sima Taparia is the matchmaker who brings couples together for arrange marriages not only in India but also in US. The reality series follows her meeting up with bachelors and bachelorettes and setting them up according to their preferences. The show has received a lot of backlash for pushing regressive ideas in the name of Indian culture. Indian Matchmaking: Twitterati Slam the Netflix Show for Its Regressive Content and Cringey Dialogues (Read Tweets).

Taparia who introduces herself on the show as 'Sima Taparaia, I'm a matchmaker from Mumbai' has become quite famous since the show began streaming and many want to know more about this 'Rishta aunty'. Taparia's matchmaking process on the show follows an interesting pattern where she meets each candidate personally and after taking into account their lifetstyle, suggest a suitable match. On the show, she also brags about setting people up from everywhere inclduing during a vacation to airport baggage pickups. Well, here are some interesting bits about this woman who's becoming famous in the Indian wedding circles.

Who is Sima Taparia?

Sima is a Mumbai-based professional matchmaker who originally hails from Gulbarga in Karnataka. Speaking about her upbringing, the matchmaker speaking to CondeNast Traveller said, "I always had great ambition and wanted to make something of myself so people far and wide would know my name."

Sima Taparia herself was married into an arranged marriage set up by her parents when she was 19. The famed matchmaker recalls her in-laws being orthodox and was quoted saying, "My in-laws were from an orthodox family of Marwaris and so I never really had the chance to work on my dreams." Sima has been married over 35 years now.

On the show, Sima Taparia calls herself a natural-born matchmaker. Speaking about why the business has worked out for her well, she said, "I am an extrovert and so I am very social and I love meeting new people, talking to them and finding out little details that I lock away in my brain.” Taparia has maintained that she only works with high-profile clients and rumour has it that she charges as much as $2000 to $5000 per match. On her Netflix show, she claims, "In India, I'm matching for 135 families."

Indian Matchmaking is Not Taparia's Only Streaming Stint!

Before Indian Matchmaking, daughter’s experience with arranged marriage was documented in the documentary A Suitable Girl which was directed by Smriti Mundhra. A Suitable Boy Adaptation: Ram Kapoor, Shahana Goswami and Vivek Gomber on Board for Mira Nair’s BBC One Series.

Indian Matchmaking is now streaming on Netflix and has eight episodes taking us through the journey of five singletons who are finding their suitable match.

(The above story first appeared on LatestLY on Jul 21, 2020 06:01 PM IST. For more news and updates on politics, world, sports, entertainment and lifestyle, log on to our website latestly.com).