Indian Matchmaking Season 2 Review: Sima Taparia from Mumbai is Back With Yet Another Yawn-Inducing Series On How To Get Married! (LatestLY Exclusive) 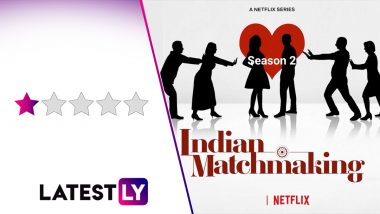 Indian Matchmaking Season 2 Review: For someone who has been a witness to this deplorable matchmaking circus that plays out in the majority of Indian homes, Sima Taparia's way of finding mates for people on Netflix's Indian Matchmaking is appalling. But the first season was a meme classic, so much so that the extreme criticism couldn't deter Netflix from coming up with a second season.  Indian Matchmaking: Sima Taparia Confirms None of the Participants Found a Suitable Life Partner on Netflix Show.

So Sima Taparia is doing what she does best in this season as well from finding a match to judging people's existence. The new additions to the list are Viral, Akshay, Arshneel and Shital while the first season alums - Pradhyuman, Nadia, Shekhar - return. It takes the usual trajectory of finding a girl or a boy, organising a meetup, taking feedback and then judging the aspirants. Pradhyuman has found a match, no thanks to Sima, while Nadia is in the middle of lot of emotions, again no credit to Sima.

It's very difficult to critique a show like this which you don't relate to even one bit. Still I will try.

Sima seems to have a vocab improvement. The 'compromise' has evolved to 'patience'. It's not just my opinion but one of the marriage hopefuls, Akshay's as well. She is berating the men more this time around because I had read, last season, Simaji was a typical Indian Aunty reprimanding the women more than men. At one point, she even asks a guy to not go looking for the best if they aren't themselves. Guess while Netflix ignored the reviews, Auntyji read them and decided to go 'progressive', and still managed to be regressive.

Also, for some reason, everyone's obsessed with Priyanka Chopra and Nick Jonas' wedding this time around. From the age-gap topic to wedding clothes to Sima Aunty saying, "Even if it was Nick Jonas, Priyanka wouldn't shift to his chicken factory", looks like PC and NJ are role models for this generation when it comes to weddings!

However, Indian Matchmaking is really dull. The whole cycle of speaking to the client, getting their specifications, ignoring them, finding a potential match, the dates and the rejections get boring after first two episodes. Nothing happens which excites you much. It's like matching on a matrimony app, asking for ASL (this is for the Yahoo Messenger generation), meet once, don't click with that person and then go back to the 'biodata' hunt. So after a few of them, you lose interest and uninstall. This entire series is just that. What's bothersome is it's regressive AF, where, for instance, a pundit conducts a puja for Akshay because he feels somebody did some 'Tantra' (black magic) on the guy! Yes, Netflix India, that's what we want everyone to know about Indians and our (blind) belief system! Netflix's Indian Matchmaking Funny Memes and Jokes Are The Only Best Match You'll Get Out Of This Cringe Reality Show.

-Too dull a series for its own good.

(The above story first appeared on LatestLY on Aug 10, 2022 10:03 PM IST. For more news and updates on politics, world, sports, entertainment and lifestyle, log on to our website latestly.com).