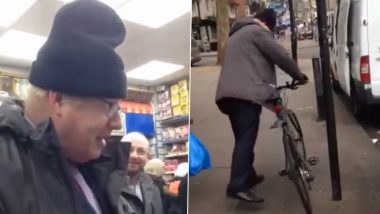 London, May 26: An old video of UK Prime Minister Boris Johnson shopping at Milad Supermarket in London is going viral on social media again. The video is seven years old when Boris Johnson was Mayor of London. In the video, which has re-surfed online, Johnson is seen using his bicycle to visit Milad Supermarket for shopping. The clip first went viral last year with a false claim that Britain's PM lives a common life and uses bicycle to commute. It's Fishy! Boris Johnson 'Trolls' EU by Wearing Fish-Print Tie After UK Clinches Post-Brexit Trade Deal.

In the video, Boris Johnson is seen buying some stuff from Milad Supermarket. He is standing at a billing counter and pays in cash. He then walks out the supermarket. Some people requests him for picture and he obliges. He then unlocks his bicycle and goes. The video was shared by Milad Supermarket on its Instagram, which has now been deleted. They had mentioned that the video was seven years old. Boris Johnson Takes First Jab of Oxford-AstraZeneca COVID-19 Vaccine, Watch Video.

Last year, the video of Johnson visiting Milad Supermarket and using bicycle went viral with people falsely claiming that he had violated coronavirus-induced restrictions. Another fake claim attributed to the old video was that he had contracted coronavirus after visiting the supermarket. Last year, on March 27, it was announced that Johnson had tested positive for COVID-19 and was subsequently hospitalised.

Johnson was discharged on April 12. As mentioned earlier, some people also shared the video recently saying this highlighted humble lifestyle of UK Prime Minister. However, they failed to realised that the video is old.

(The above story first appeared on LatestLY on May 26, 2021 01:28 PM IST. For more news and updates on politics, world, sports, entertainment and lifestyle, log on to our website latestly.com).