The United Kingdom sealed a post-Brexit trade deal with the European Union on Thursday. But what stole the show was Boris Johnson's tie which has fish printed on it. 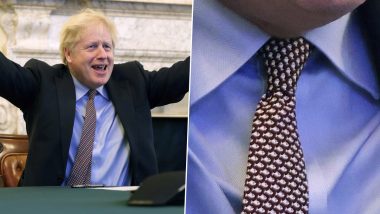 London, December 24: The United Kingdom sealed a post-Brexit trade deal with the European Union on Thursday. Shortly after the news broke, British Prime Minister Boris Johnson tweeted: "Deal is done." Boris Johnson also addressed a press conference during which he said: "We have taken back controls of our laws, borders and fishing waters." But what stole the show was Johnson's tie which has fish printed on it. Many said Johnson trolled EU by wearing tie patterned with fish. 'Deal is Done', Says Jubilant Boris Johnson After UK Seals Post-Brexit Trade Pact With EU.

Hours before the UK and EU reached a post-Brexit trade deal, it was reported that the negotiation was haggling over the EU's right to fish in British waters. Access to the UK's fishing waters had been one of the contentious points of the Brexit negotiations. In the end, both reached an agreement under which EU boats will have access to British fishing waters, with the UK's share of fish in its own waters eventually rising to two thirds. Will Boris Johnson Cancel His Visit to India for Republic Day 2021 Event After Detection of New Coronavirus Strains? MEA Responds.

Once the deal was finalised, Johnson appeared before cameras wearing a fish-print tie. His act did not go unnoticed with people tweeting that the British Prime Minister "trolled" EU by wearing that tie.

The deal is done. pic.twitter.com/zzhvxOSeWz

On the subject of fishing, Johnson said: "For the first time since 1973, we will be an independent coastal state with full control of our waters, with the UK’s share of fish in our waters rising substantially from roughly half today to closer to two-thirds in five and half years’ time – after which there is no theoretical limit beyond those placed by science or conservation on the quantity of our own fish that we can fish in our waters."

(The above story first appeared on LatestLY on Dec 24, 2020 11:49 PM IST. For more news and updates on politics, world, sports, entertainment and lifestyle, log on to our website latestly.com).