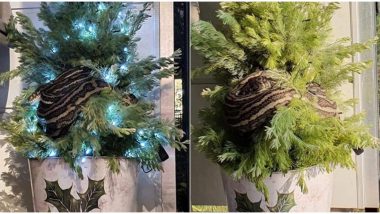 People readying for their Christmas are most probably picking out the best of ornaments for their tree. But an Australian resident who returned from her vacation was shocked to see a dangerous adornment around their Christmas tree. Brisbane resident Leanne Chapman found a long python snake wrapped around her tree in her unattended house, while she was out on vacation. It was a 10-foot-long python and they realised only after there was some commotion in their balcony. A picture of the snake wrapped around the tree has been shared on social media and it serves as a warning to everyone who may leave their tree unattended. Can You Spot the Snake? Queensland Family Wakes Up to a Python Relaxing on Their Sun Lounge (Watch Viral Video).

Leanne Chapman and her husband went on a backpacking trip to England. On returning to their home in Brisbane, Queensland, they found something unusual in the balcony. They saw birds making some crazy sounds in the balcony. She told 7News, "My partner's gone out there was actually videoing them because they were going mad. As he's turned around and stepped back, he didn't realise he was leaning on the Christmas tree with the snake wrapped around it." They were in quite a shock to see a dangerous snake piled on their pine! How to Keep Your Christmas Tree Safe From Kids and Pets: Ways to Baby-Proof and Make a Pet-Friendly Christmas Decor.

OMG. Leanne Chapman emigrated to inner-city Brisbane from the UK and is about to have her first Christmas here. She’s got a (live) python in her tree, lucky her ... Really, this is not normal. Pics via @abcbrisbane and Leanne 🐍 pic.twitter.com/loEaPVbPPA

Aren't the pictures scary? While anyone else could have fainted on the sight of this long snake, the couple did not panic as much. They were shocked initially but they let the snake be! "It wasn't bothered by us. It just stayed there for a good few hours as we watched it through the window," Chapman said. Well, Aussies are too used to coming across such snakes it seems. They called it a really beautiful one. While this family may have let it be, this serves as a good warning to everyone who is keeping a Christmas tree to check for the creepy crawlies time and again.

(The above story first appeared on LatestLY on Dec 15, 2019 11:30 AM IST. For more news and updates on politics, world, sports, entertainment and lifestyle, log on to our website latestly.com).