The villagers saw the dead python with his bloated up stomach, a lot of crowds gathered around to see. They saw a monkey's tail coming out of the python's mouth. 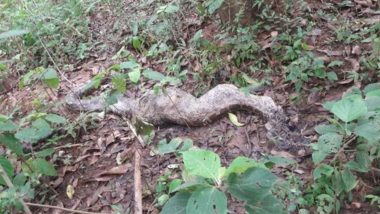 Pythons are dangerous snakes. They are known to swallow any of their preys and just rest for days later. Humans or animals, these snakes gulp down the entire prey and it is hard to escape. But a group of monkeys took their revenge after a python happened to feast on one of their babies. The incident took place in Munger in Kharagpur, West Bengal. The villagers found a 6-foot python lying dead in one of the gardens near the mountain. Shocking Video of Giant Python Eating an Indonesian Woman Will Freak You Out.

On Wednesday morning, when the villagers saw the dead python with his bloated up stomach, a lot of crowds gathered around to see. They saw a monkey's tail coming out of the python's mouth. The python probably attacked a baby monkey and gulped it down. It is said that a group of monkeys would have then attacked the python when it was resting. The monkeys were in much force and thus the python died.

Pythons have been a common spotting in the Wst Bengal region. One of the forest officers in Baikunthapur forest in Jalpaiguri had miraculously escaped death when he tried to pose for a selfie with the giant snake. The news about the python being killed by monkeys spread like wildfire in the village and they have also informed the forest officials about it.

(The above story first appeared on LatestLY on Aug 02, 2018 11:44 AM IST. For more news and updates on politics, world, sports, entertainment and lifestyle, log on to our website latestly.com).