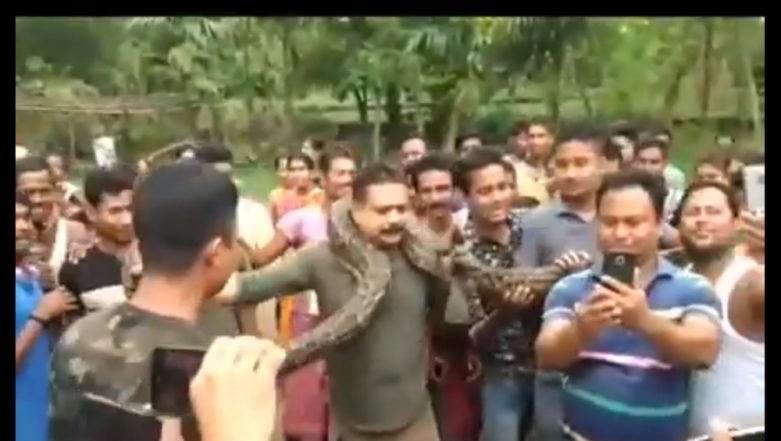 West Bengal, June 18: It was a narrow escape for the Range Officer of Baikunthapur forest in Jalpaiguri, West Bengal. According to an ANI report, Sanjoy Dutta was miraculously saved after a phython he rescued from a village, almost strangled him to death while he was posing for selfies with locals.

According to reports, the huge python measured 30 feet, and weighed 40 kgs.  After receiving information from the locals, Dutta went to the spot, where the python was about to attack a goat in the village.

#WATCH Narrow escape for Sanjoy Dutta, Range Officer of Baikunthapur Forest in Jalpaiguri after a python he rescued from a village almost strangled him to death while he was posing for selfies with locals. #WestBengal pic.twitter.com/KroJHOCOkk

Reportedly, the snake will be released today into the forest area. While, he risked his life to catch the python, but it was proving to be extremely fatal, while posing for selfies with the fellow villagers.

In a shocking incident that came up few days back, from a village in the Southeast Asian nation, a woman was killed and swallowed whole by a reticulated python, considered biggest and strongest in the world. The shocking video contains images of villagers cutting out the slithering snake’s giant belly to find the human body it had swallowed completely!