While Starbucks prides itself on variety, sometimes it can come back haunt their coffee chains. While a customer is well within his right to order whatever they want, they have been known to abuse this right and with abandon. 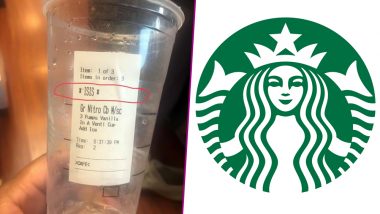 Starbucks orders are making netizens go bonkers. It all started with an ever so demanding customer,  a tall order that had nothing to do with the size of the coffee and a frustrated Starbucks barista named Josie. What followed was a tweet that went viral within minutes and a media frenzy to go with. In a recent Twitter post,  Josie posted a picture of a  ridiculous order placed by the customer that had all the bells and whistles in form of add-ins crammed into a drink that can barely be described as coffee. The picture with the caption  “On today's episode of why I wanna quit my job.”  went instantly viral and people responded to their own war stories and was picked up by several news outlets. The tweet has since been deleted by Josie, who felt he wasn't given due credit. Here's a study on how too much coffee can mess with your health. This might just make you go easy on your order

Here's what the barista tweeted

the fact y’all didn’t give me credit for my photo and y’all called me a woman right off the bat 😭 https://t.co/C7qZBWXsub

However, fret not, because his tweet is not the only eye-roll-inducing order that's making the rounds in the Twitterverse.

While they're scores of coffee shops in every corner, Starbucks is the most frequented coffee chain in the world. It’s not the quality of the coffee that inspires their regular patronage. On the contrary, it's their dependability and the trimmings up the wazoo. Not only can you have your coffee with regular milk, but you can also choose from an array of different kinds of milk, creamers, non-creamers, whipped cream, caramels to name a few. Sometimes ordering a drink at Starbucks is akin to speaking in Klingon - Triple Venti Soy No Foam Latte, anyone? - See, Klingon.

It’s this control that has turned people into the most unreasonable, obnoxious coffee drinkers of all times. Every person has a preference that varies. Some like it black, some would prefer cream, some milk, some sugar, some without, and some with bananas. There’s nothing wrong with getting specific with your order. However, there’s a limit to specifics, people. And now, people seemingly get more creative with their orders. And the Baristas are having a hard time keeping up with the tall orders.

Check Out What Netizens Are Saying

man, people get some crazy drinks at starbucks pic.twitter.com/IvDZwqNPyJ

He's not the only one

i raise you this pic.twitter.com/07mhU0IyED

They're everywhere. One Twitter user replied: "In my Starbucks days the most annoying customer was "Venti extra hot chai tea latte no water no foam". We all knew the order because she had an exact temperature she wanted it and would ask to see the thermometer to make sure."

In my Starbucks days the most annoying customer was "Venti extra hot chai tea latte no water no foam". We all knew the order because she had an exact temperature she wanted it and would ask to see the thermometer to make sure. pic.twitter.com/oiU4Sydwtl

We feel for her.

this order comes in every other week pic.twitter.com/PAdcIFotyv

Starbucks: a coffee shop that always steps up during the need of the early hour. A strong cuppa that jolts us awake and carpe the day. While the quality of the coffee is always subjective - some love it while others are on the fence - there is a consensus that one cannot get out of the house without tripping over this ubiquitous coffee chain. You might not be able to depend on much in this ever-changing landscape of your neighbourhood but you can always trust Starbucks to keep you well-caffeinated and sane, ergo significantly reducing the early morning homicide rates. However, we need the baristas to serve up your drink. So let's not force them to quit with our despotic orders. So before you place that order ask yourself: Am I ordering a cup of coffee or dessert? If your coffee has more than two trimmings you are inarguably ordering a dessert.

(The above story first appeared on LatestLY on May 05, 2021 01:37 PM IST. For more news and updates on politics, world, sports, entertainment and lifestyle, log on to our website latestly.com).