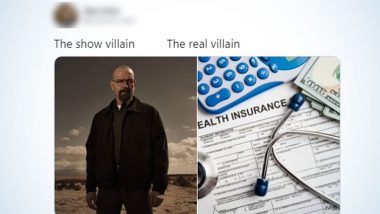 Ah! What a respite memes can be in stressful times. We all know the moments we have stalked some of the funniest meme trends. For all of you meme mongers, the most recent meme trend is called "The show villain & the actual villain" memes. Yes, and it is as simple as the name sounds, except it is extremely funny as well. So just as the name of this meme trend suggests all you have to do is compare the universally accepted villain of a popular show or movie vs the ones that are really to be blamed in the most sarcastic (or enlightening, you never know) way.

All you have to do is merge both the pictures together and label them with, "the show villain" and "the actual villain" respectively. However, you really need to have a knack for shows and series. For example, if you have watched Breaking Bad you will know that the villain, to be precise is Mr Walter White who goes out of his way to provide for his family. However, if you also remember that one fly scene that is said to be one of the most talked-about and is said to have a metaphorical reference, you can say that the main villain was the fly. LOL. Isn't it hilarious and also makes you think for a bit? Well, check out some of the best ones online.

I approve this message 👀 https://t.co/AVnY3bbCPU

The trend may not seem funny to people who aren't a nerd for TV shows and movies. However, some of the memes under the trend also take a sarcastic dig at everything that's wrong with society. For example, the villain: plastic straws, the real villain: massive smoke emitting factories.

(The above story first appeared on LatestLY on Jul 13, 2020 09:12 AM IST. For more news and updates on politics, world, sports, entertainment and lifestyle, log on to our website latestly.com).