Joshua Trump was targetted by other kids in the school and they would swear at him constantly. 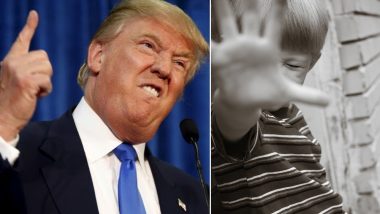 Boy was bullied in school because of his surname Trump (Photo credits: Twitter and Pixabay)

One would assume sharing the surname with the President would come with a set of advantages, but not if it is Trump! An 11-year-old boy named Joshua Trump with no relation to the US President whatsoever, had to legally change his surname, thanks to the bullying he underwent in school. A resident from Delaware has been undergoing bullying since the year the start of 2016, during the presidential elections. U.S. First Lady Melania Trump: I'm the Most Bullied Person in World.

Joshua Trump was targetted by other kids in the school and they would swear at him constantly. Their taunts and bullying over his surname continued during the Presidency of Donald Trump. The bullying went on to a point that the parents decided to homeschool Joshua for a year. Now Joshua will have to carry his stepfather's last name Berto, until his name is changed legally.

Joshua Berto is now enrolled in another school this fall and the parents discussed his past torment over the Trump surname with the school's principal. After that, the teachers from the school were also made aware of the incidence and referred to him as Joshua T. instead of taking his full name. But things were still not going well when Joshua had to still undergo bullying in his gym class and the school bus. The children would chant "Trump Trump" and "Dump Trump."

Mark Mayer, the principal was quoted in a report, "We disciplined the children involved and agreed to switch Joshua to a new bus." But when the bus attendant took attendance, the torture continued. Joshua ended up cursing himself with all the continuous bullying. His mother Megan Trump Berto told in another report, "He said he hates himself, and he hates his last name, and he feels sad all the time, and he doesn't want to live feeling like that anymore, and as a parent that's scary." Nine-Year-Old US Boy Commits Suicide After He Was Bullied For Being Gay: What Parents Should Know About Suicidal Behaviour In Children.

They have begun with the process to officially change their last name but it will still take some more time. For the meantime, they have registered his last name as Berto in the school system and the substitute teachers have also been informed about the issue. But it is indeed a scary thought to be bullied with such intensity that someone has to change their identity altogether.

(The above story first appeared on LatestLY on Dec 14, 2018 04:29 PM IST. For more news and updates on politics, world, sports, entertainment and lifestyle, log on to our website latestly.com).