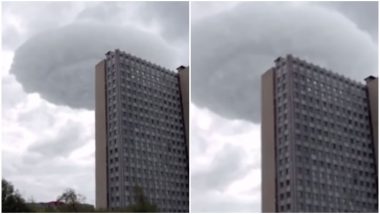 The cloud in a shape of UFO (Photo credits: YouTube grab)

There has been enough speculation and theories about alien life. The possibility about their existence strengthened even more recently when a UFO shaped cloud passed over the Russian capital. A cloud shaped exactly like a flying saucer loomed over the skies in Moscow and people were convinced that aliens are making a landing. The cloud was spotted over the Adropov Avenue in the city. The video of the cloud spread instantly sparking more discussion about the extra-terrestrials and if the end is near.

The man who shot the video of the cloud can be heard saying, "What is that? Aliens? Is it a UFO?" Soon, there was a debate on social media, causing a frenzy. Some people commented there was something strange in the clouds across the city. While someone thought it was their imagination. A typical response on the clip was "This is the end, isn't it?" During the FIFA World Cup, a mysterious shape was spotted in the Russian skies, again sparking the alien discussions.

Check out the video of the UFO-shaped cloud in Moscow:

But putting an end to all these speculations, the meteorological department claimed that it was just a fluffy low-level cloud. It is called a cumulus cloud. While another explanation states it was a lenticular cloud, which forms when air travels along the surface of the Earth and there's an obstruction of some sort to it. UFO Spotted in China? Videos And Pictures of Bright Lights Spark Talks on Alien Life.

Check how people on social media reacted to this cloud sight:

#UFO Hiding In The Clouds Over #Moscow Russia With Defining Features https://t.co/YukNq1Jao1 pic.twitter.com/rW2jgEuJv2

The cloud does look creepy, but there is science behind its shape. Aliens are not visiting us through the clouds.

(The above story first appeared on LatestLY on Aug 06, 2018 09:42 AM IST. For more news and updates on politics, world, sports, entertainment and lifestyle, log on to our website latestly.com).