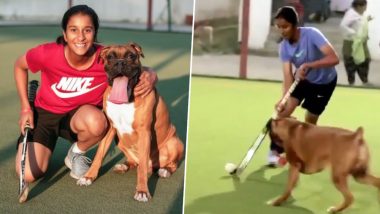 Indian cricketer Jemimah Rodrigues is currently enjoying her time off playing hockey. The 18-year-old took to Twitter to share video playing hockey with her pet dog Theo. Jemimah who grew up playing different sports is familiar with sports other than cricket too. And seeing her play it seems she is quite good at hockey too. Theo also seems to be quite well versed with Jemimah's hockey tactics and can be seen trying to get hold of the ball. First in Indian Cricket: Women State Captains to Have Voice at BCCI Conclave.

Jemimah shared the video with the caption, "A lil' bit of #hockey on my day off with Theo, the 'Goodest Boy' in town!#WhoLetTheDogsOut #dayoff." She is an allrounder for the Mumbai women's cricket team. Former Indian cricketer turned commentator Harsha Bhogle commented on the video saying, "Excellent." As the video was widely shared, people commented on praising Jemimah's sporting skills. The video has received over 19, 200 views and has more than 2,400 likes at the time of publishing this article.

A lil' bit of #hockey on my day off with Theo, the 'Goodest Boy' in town! 🐶 #WhoLetTheDogsOut #dayoff pic.twitter.com/YQm7L42Cr1

Earlier this week, Jemimah was in the news for giving a befitting reply to an internet user. The tweet read, "I like jemimah. Very cute. Are you seeing anyone?" She replied saying, "After this match? I'm definitely seeing a bright future for Women's Cricket! #WIPL #womenscricket #ipl #WomensT20Challenge."

Jemimah is expected to be an integral part of the Women's World T20 which is scheduled to take place in February next year. Last year, India had come had reached the semi-finals. This time they are aiming to win their first title. Jemimah in an interview had said that she looks up to Indian cricketer Rohit Sharma as her idol.

(The above story first appeared on LatestLY on May 18, 2019 04:50 PM IST. For more news and updates on politics, world, sports, entertainment and lifestyle, log on to our website latestly.com).