Woman in Cambridgeshire Spots Mysterious Lights Like UFO in Sky, Believes It Could be Aliens! (Watch Video) 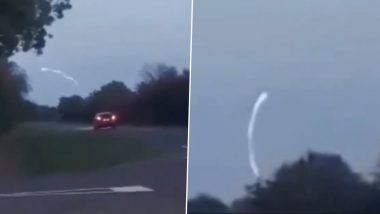 At this point of year in 2020, would you be surprised if the aliens paid you a visit? Well, that's exactly what happened to a woman in Cambridgeshire when she saw mysterious light trails in the sky last week? A woman named Kerena believes that she saw "UFO" while she was waiting around a busy street A428, St Neots Road in Cambridgeshire. Video of her unusual object sighting has been shared online and you can decide for yourself if it was an UFO or somelight show in the distance. Although Kerena almost thinks it could be aliens. ‘UFO’ Spotted in Liverpool! Pictures and Videos of Green Flying Saucer Seen in the Skies at Merseyside.

Kerena spoke to CambridgeshireLive describing what unidentified objects she saw. She saw it on September 19 around 7.30 PM while she was waiting neat A428. A look into the sky, she saw bright light swirling in the sky, like a firework and thinks they could have been aliens. She added that her son wasthe first one to spot it. "It was just a flashing light. 'He was like what is that? And I said a plane? He pointed out that it was going round in a strange pattern, definitely not flying like a regular plane heading for a destination." She even wondered if would be a drone but realised that the light was too far to be a drone."

She joked to the report, "Obviously with the way 2020 is going it leads me to believe it could be nothing other than aliens. There is just no other explanation, the only trails I have seen planes leave are smoke but nothing like this." It looks more like a firework show, right? Do you think it would be a an UFO after all? It reminds us of another recent sighting which was actually a blimp. A GoodYear blimp flying over New Jersey was mistaken to be a flying saucer. Many people caught the recording on their phones, but to much disappointment or not, it was a flying balloon. What do you think about the latest video?

(The above story first appeared on LatestLY on Sep 28, 2020 01:41 PM IST. For more news and updates on politics, world, sports, entertainment and lifestyle, log on to our website latestly.com).