‘UFO’ Spotted in Liverpool! Pictures and Videos of Green Flying Saucer Seen in the Skies at Merseyside 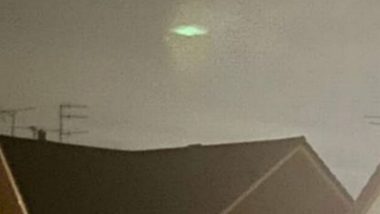 A Liverpool man said that he saw an unidentified flying object (UFO) over skies in Merseyside. He recorded the green flying saucer spotted in the UK town of Prescot and shared it on social media. He said that the aerial phenomenon was spotted at 2:45 am on August 7. He said that it was a classic saucer-shaped object. There seem to be more witnesses to the incident who said that it flew off quickly. They also confirmed that it was not optical illusions or reflection of TV or computer on window panes. Soon, theories of alien visitations once again began doing rounds. Alien Life on Venus? Netizens Make Funny Memes and Jokes on Recent Possibility of Finding Extraterrestrials on Planet Other Than Mars.

The stunned Scouser told the Liverpool Echo, "Me and my friend were at her house in Prescot when we heard a loud noise outside, like an aeroplane, so we went to look out of the window and we saw the saucer. It was green and it looked just like a flying saucer, like the sweets. It was only there for a few seconds and then it flew up into the clouds and went in the South-East direction, towards Huyton and Halewood. But this was shaped like a UFO, it was green and it was loud, I don't know what else it could be." US Pentagon to Reveal UFO Findings Of Unexplained Alien 'Vehicles Not Made on This Earth' to The Public.

On September 15, Twitter users from New Jersey took to social media sharing pictures and videos of unidentified objects being seen in the skies. Some even said that it could be alien visitations. But it was later found out to be promotional blimp by Goodyear.

At multiple times in the past, there has been UFO sightings in Loverpool. In 2008, unexplained lights were seen in the sky. Once a 2015 Ryanair flight from Dublin to Liverpool was forced to abort its landing when something that looked like a drone, was spotted by the airport ground staff.  On that occasion, airport spokesman Robin Tudor said, "It can be things like a flock of birds, but we always play safe in these situations and will investigate."

(The above story first appeared on LatestLY on Sep 19, 2020 02:34 PM IST. For more news and updates on politics, world, sports, entertainment and lifestyle, log on to our website latestly.com).