You could assume anything from beard trimmers to condom packs but a Twitter thread has women discussing it all in detail. 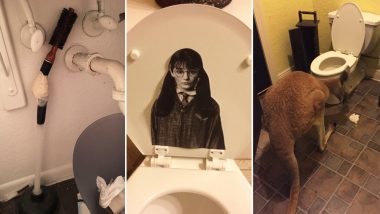 Boys will be boys and so will be the way with their washrooms. One can never really predict what they will find in a men's bathroom but looks like there are somethings really unique or rather innovative in there. You could assume anything from beard trimmers to condom packs but a Twitter thread has women discussing it all in detail. Women are sharing weirdest things they have found in a men's washroom. So from photo frames to a brush on the plunger, these pictures have some innovative resources in a man's bathroom. Woman Falls Through the Ceiling of a Mexican Restaurant at California after Asking to Use the Washroom; Claimed to Be on Drugs (Watch Video).

The interiors can get really whacky sometimes and what Indians term jugaad can be clearly seen in these pictures. Leave away all the assumptions about the uncleanliness of men's washroom aside, and just watch through these pictures. You won't be disappointed or maybe you would.

Check Pictures of Woman Sharing Photos From Inside Men's Washrooms

It all started here

ladies what’s the weirdest thing you’ve ever found in a boy’s bathroom? allow me to start pic.twitter.com/WbvwM86H4b

Bathtub turns into a sink

Funny and weird paintings have a good spot

Moaning Myrtle, what are you doing here?

by far the craziest thing i’ve ever seen in a bathroom pic.twitter.com/ncZjhFZ3Rt

The thread goes on with many weird pictures and videos. While some women have asked, "Are men okay?" to which some other user replies with a negative. The tweet has close to 16,000 retweets and 61,000 likes. It is indeed a funny thread giving a peek behind the closed doors of men's bathrooms.

(The above story first appeared on LatestLY on Dec 18, 2018 07:20 PM IST. For more news and updates on politics, world, sports, entertainment and lifestyle, log on to our website latestly.com).