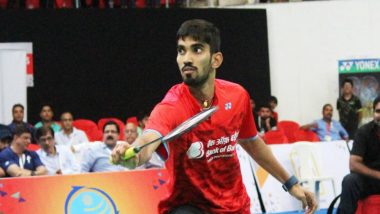 Badminton Association of India (BAI) nominated Srikanth Kidambi for Khel Ratna after he apologised for pulling out of Asian Badminton Championship 2019-20 tournament midway. HS Prannoy who has also pulled out from the tournament is given a show-cause notice. Prannoy had given an apology which had been ignored by the BAI. The statement further said that there have been issues with Prannoy and is he doesn’t respond on time, the BAI will take stern action on the player. On disciplinary grounds, BAI had not nominated Srikanth and Prannoy for the Rajiv Gandhi Khel Ratna and Arjuna Award respectively. Srikanth Kidambi Birthday Special: Some Lesser-Known Facts About India's Ace Shuttler.

“Srikanth and Prannoy had left the squad at the Asian Badminton Championship in Manila in February, despite advice not to leave, which put India's chances of winning the historic medal at the championship in a lurch," read a BAI statement. "We have received an email from Srikanth in which he has accepted the mistake and he has also promised to not indulge in such activities in the future," it added. Prannoy had vented out his anger on the association for missing out his name for Arjuna award for the second successive year.

The ace shuttler vented out his frustration on social media and had questioned BAI for overlooking his name despite winning medals for the country not only at the Commonwealth but also Asian Games. The Association further went on to say that they are drafting a code of conduct not only for the players but also the coaches and the technical staff. Now in place of Prannoy, but the Badminton Association of India has also nominated Sameer Verma.

(The above story first appeared on LatestLY on Jun 19, 2020 08:25 PM IST. For more news and updates on politics, world, sports, entertainment and lifestyle, log on to our website latestly.com).