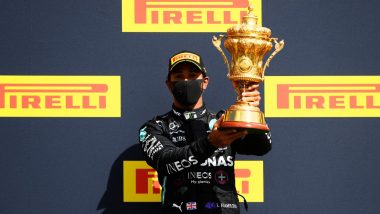 Hamilton extended his Formula One world championship lead to 30 points after he limped to the finish line in an astonishing climax to a race he had dominated from pole position.

Red Bull's Max Verstappen finished second and will regret a chance to finish first had he not pitted for fresh tyres in a bid to steal an extra point for the fastest lap, with Ferrari's Charles Leclerc third. Hamilton's teammate Valtteri Bottas failed to score after also suffering a late puncture and finishing 11th.

Hamilton and Bottas had been formation flying for 50 of the 52 laps until tyre drama struck, as per a report on Formula One's official website. Bottas was the first to suffer as his tyre deflated on Lap 50 and cost him his second place before on the very last lap, Hamilton suffered his own issue. Lewis Hamilton Wins British Grand Prix 2020 With Punctured Tyre; Twitterati React to Brit’s Record Seventh Win.

McLaren's Carlos Sainz also endured a slip up as a last lap tyre glitch saw him eventually come home P13 after he was set to finish fourth, allowing Renault's Daniel Ricciardo to claim fourth, following a late pass on the sister McLaren of Lando Norris.

Renault's Esteban Ocon was engaged in a long battle with the Racing Point of Lance Stroll and eventually finished sixth with Pierre Gasly finishing seventh for AlphaTauri.

Alex Albon finished eighth for Red Bull, having recovered from a Lap 1 battle with the Haas of Kevin Magnussen that saw him fall to last, while Lance Stroll and Sebastian Vettel rounded out the top 10, Vettel holding off a late charge from the recovering Mercedes of Bottas.

Earlier, comeback man Nico Hulkenberg's British Grand Prix ended before the race could start on Sunday due to a technical snag that saw him not being able to start his car.

The German driver -- who has not driven in F1 since the end of last season -- was called up by Racing Point as a last-minute replacement for Sergio Perez, who tested positive for COVID-19 late on Wednesday.

Meanwhile, all F1 drivers lined up on the start-finish line ahead of the Grand Prix in their stance against racism. Seven drivers decided to stand while the rest took a knee, facing back towards the grid.

Kevin Magnussen of Haas, the two Alfa Romeo drivers Antonio Giovinazzi and Kimi Raikkonen, Carlos Sainz of McLaren, Charles Leclerc of Ferrari, Daniil Kvyat of Alpha Tauri and Max Verstappen of Red Bull were the ones who stood this time.

(The above story first appeared on LatestLY on Aug 02, 2020 09:38 PM IST. For more news and updates on politics, world, sports, entertainment and lifestyle, log on to our website latestly.com).