Mercedes teammate Valttari Bottas was close at second but his tyre burst just laps from home giving Max Verstappen to seize the moment and take the second place while Charles Leclerc came third. Bottas, who three laps far from making an All-Mercedes one-two finish came 12th after a nightmarish finish. 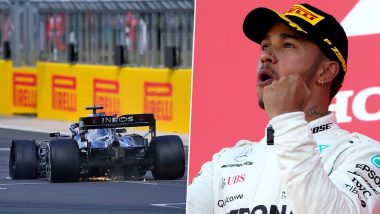 Lewis Hamilton won a record seventh British Grand Prix in dramatic fashion. The Brit survived a late tyre scare to win the race in Silverstone, crossing the line in a punctured tyre. The six-time World Champion started first on the grid but Mercedes teammate Valtteri Bottas was ahead and threatened to the take the lead but Hamilton held off the attempt to go first in turn one. He was all on his own from there and never came close to giving up the lead until his tyre burst just one lap from home.

And the first one by crossing the line with a puncture!#BritishGP 🇬🇧 #F1 pic.twitter.com/ueDrd5BwOo

You have to credit Lewis Hamilton for all his success in #F1 pic.twitter.com/UbabkoD6EG

Lewis Hamilton in sector 3 of the final lap #BritishGP pic.twitter.com/hvDZA8djzk

How Lewis Hamilton managed to win the race with only 3 tyres is beyond me 👊👏. #Formula1 #Silverstone pic.twitter.com/qUvJHPByPF

The 🐐 has won the #BritishGP with 3 running tyres!!!

That last lap almost had me 😅 We still got this 🏆🏁 I can’t express how grateful I am to all the fans, and to my incredible team. To think this is the 7th home win is just insane. Thanks for the positive energy everyone, we did this together. #BritishGP #TeamLH #StillWeRise @F1 pic.twitter.com/PyAPZ6SZrI

This was Hamilton’s third consecutive race win after the Steiermark and Hungarian GP win last month. Verstappen, who could have overtaken his Mercedes rival with some time finished second for a second consecutive time after Hungarian GP. Daniel Ricciardo came fourth in the race.

(The above story first appeared on LatestLY on Aug 02, 2020 08:51 PM IST. For more news and updates on politics, world, sports, entertainment and lifestyle, log on to our website latestly.com).