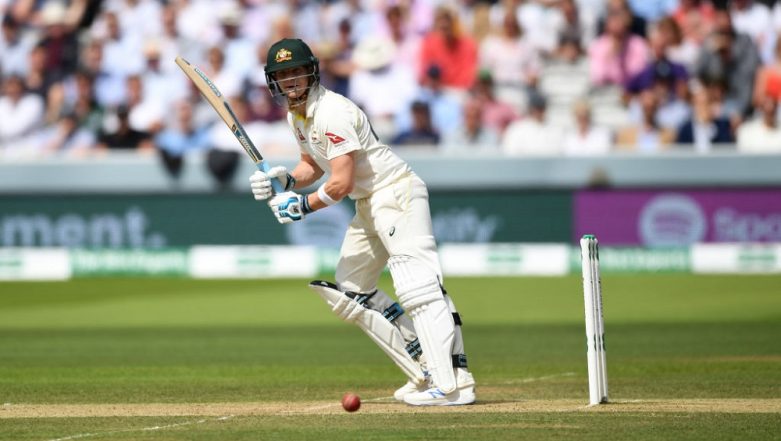 London, August 17: Steve Smith held Australia's batting together in the face of a collapse as they rode his unbeaten half century to post 155/5 and trail England by 103 runs, at lunch on Day 4 of the rain-affected second Ashes Test at Lord's on Saturday. Smith was batting on 53 from 122 balls (6x4), his seventh consecutive Ashes half century, as skipper Tim Paine gave him company at the other end on 21 off 63 balls.

Smith, who was batting on fifty for the third time in the series, got to the landmark by tonking left-arm spinner Jack Leach for a four over mid-wicket as once again the former Aussie skipper proved to be the difference between the two sides. In the first Test, which Australia won by 251 runs, Smith notched up two centuries to put up a masterclass display of five-day batting in complete unorthodox fashion. Steve Smith Hit by Jofra Archer's Lethal Bouncer During Ashes 2019 2nd Test, Twitterati Shares Video and Says 'Only Way to Dismiss Him' in a Match.

For England, who dominated Day 2 after the first day's play was washed out, pace spearhead Stuart Broad returned best figures of 3/44. Resuming at 80/4 after no play was possible post lunch on the second day due to incessant rain, the tourists lost Mathew Wade (6) to Broad who tempted the batsman to a drive with the ball flying to Rory Burns at third slip.

Broad bowled beautifully throughout the first session with the pitch and overhead conditions helping his cause. Smith was beaten on a few occasions by Broad and troubled to a degree by Archer but England failed to get his prized wicket.