Steve Smith Hit by Jofra Archer's Lethal Bouncer During Ashes 2019 2nd Test, Twitterati Shares Video and Says 'Only Way to Dismiss Him' in a Match 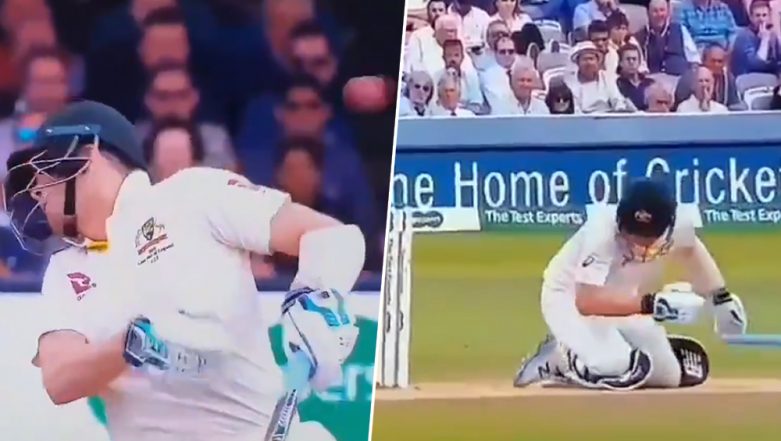 England fast bowler Jofra Archer executed a stunning bouncer that hit Steve Smith right on the face during the second test of Ashes 2019. The bouncer reminded fans of a similar delivery by Archer during the ICC Cricket World Cup 2019. It was Hashim Amla who was on the receiving end then. The South African batsman had suffered from consussion after getting hit by the Archer bouncer. Ashes 2019 First Test Stats: Steve Smith Surpasses Virat Kohli, Stuart Broad Takes 450 Wickets & Other Records Made in Edgbaston Test.

This is the debut test for pacer Jofra Archer. However, his lethal delivery to Steve Smith has given rise to plenty of Twitter reactions. In fact, Smith who is known as a tough cookie, fell straight on the pitch after getting hit on the helmet. ICC Cricket Test Rankings Updated: Steve Smith Inches Closer to Virat Kohli After Ashes 2019, 1st Test.

Ouch! That hurt me. Smith would have felt the impact 10 times more than me. #Ashes #Ashes19 #SteveSmith #JofraArcher pic.twitter.com/gSejbtLY4V

Jofra Archer Had Been Building Up the Heat! He Had Also Hit Smith on the Hand Moments Before

England Cricket Wished Him The Best After the Bouncer!

Fans Are Speechless After the Bouncer

The Fiery Spell From Archer Getting Applauded

Not a sight you wanna see in cricket

This is fiery 🔥 spell from Archer

Only way England could get rid of #SteveSmith

Update on Smith's Condition After the Blow

Steve Smith has retired hurt after falling to the floor having been clattered on the top of the neck by a Jofra Archer delivery of 92.4mph.

After receiving medical treatment, Smith was soon back on his feet but left the field for further assessment.#TheAshes pic.twitter.com/FXW1RMBOVW

And Yes the Memes Too

The blow was so nasty that Smith, who was batting on 80, had to retire hurt. The right-handed batsman had scored two hundred in the first test against England in the Ashes and was well on his way to becoming the first batsman in the history of Ashes to hit four back-to-back hundreds. However, Steve Smith still came out to bat despite that lethal blow on the head!