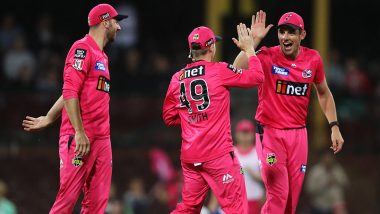 Many major cricket series and tournaments were either cancelled or postponed amid the COVID-19 pandemic and the fate of several upcoming fixtures was also in jeopardy. However, Cricket Australia (CA) have announced the full schedule of Big Bash League (BBL) 2020-21. The marquee T20 tournament is scheduled to get underway on December 3 with a game between Adelaide Strikers and Melbourne Renegades. As many as 60 matches are scheduled to be played in the 10th edition of the Big Bash League including two semi-finals and a final. Big Bash League 10 to Feature More Matches in Prime Time Slot.

The official Twitter account of the Big Bash League shared the schedule of the upcoming edition of the Big Bash League. However, they also acknowledged the fact that the tournament could well get affected by the global health scare. “There's more important things in the world than cricket right now, but here's how we'd love to see the summer of BBL unfold. Stay safe and healthy everyone,” wrote the official account of BBL on Twitter. Meanwhile, let’s look at the full schedule of the tournament.

Us deciding to launch the #BBL10 fixture amid so much uncertainty in the world... pic.twitter.com/X9uMCRbw6h

Notably, the tournament will clash with India’s 2020-21 Tour of Australia. Hence, David Warner, Steve Smith, Mitchell Starc might not be able to participate in the tournament. Also, just like many other recent sporting tournaments, BBL 2020-21 is likely to be played behind closed doors.

BBL chairman Alistair Dobson spoke about the new season and it’s challenges. “As the BBL approaches its tenth season, the League, our Clubs and our Partners are doing everything possible to ensure that we are set and ready to go for a great Summer of Big Bash,” Dobson said in a press conference.

“We will also be making more announcements in due course about enhancements to the League that we are confident will excite and delight fans across the country,” he added.

(The above story first appeared on LatestLY on Jul 15, 2020 10:34 AM IST. For more news and updates on politics, world, sports, entertainment and lifestyle, log on to our website latestly.com).