Brother Duos in IPL: Siblings Who Have Played in the Indian Premier League

IPL 2021 will begin on April 9 (Saturday) with defending champions Mumbai Indians playing Royal Challengers Bangalore RCB) in the tournament opener. The Pandya brothers, the Husseys, Brendon McCullum and Nathan McCullum, Albie Morkel and Morne Morkel are some of the siblings to have played in the IPL. 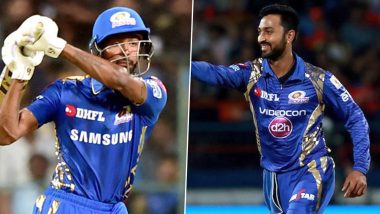 Brothers playing together for the same international team have been a common feature in international cricket. The Waugh brothers, The Flower family, Ireland’s O’Brien brothers are some of the famous siblings that represented their respective national teams in international cricket. The Indian Premier League have also over the years witnessed brothers and siblings playing in the IPL. Not all siblings have played for the same team at the same time but have gone on to represent different franchises in the tournament. As a new season of the IPL approaches, we take a look at the brothers who played in the IPL. IPL 2021 Opening Ceremony Will See Representation of Differently Abled Cricket Council of India (DCCI).

IPL 2021 will begin on April 9 (Saturday) with defending champions Mumbai Indians playing Royal Challengers Bangalore RCB) in the tournament opener. The Pandya brothers, the Husseys, Brendon McCullum and Nathan McCullum, Albie Morkel and Morne Morkel are some of the siblings to have played in the IPL. Take a look at the full list of all brothers and siblings to have played in the IPL.  Most Maiden Overs in IPL: From Lasith Malinga to Bhuvneshwar Kumar, 6 Bowlers Who Have Bowled Most Maiden Overs in Indian Premier League.

The Pandya brothers are among rare siblings to play for the same franchise in the IPL. Both play for Mumbai Indians and have so far won four IPL titles between them. Hardik Pandya, who is the younger of the two, made his IPL debut in 2015 while Krunal made his debut in the next season. Both have also gone on to represent the national team in white-ball cricket.

The Pathan brothers have played in the IPL since the inaugural IPL 2008 season. Irfan started with Kings XI Punjab while the elder Yusuf played in the title-winning campaign with the Rajasthan Royals. He was also part of the Kolkata Knight Riders’ winning teams in 2012 and 2014. Both have now retired from all forms of cricket.

The Hussey brothers have been part of the IPL in some capacity since the inaugural season. Michael Hussey started for Chennai Super Kings and also represented Mumbai Indians while David Hussey played for Kolkata Knight Riders, Punjab Kings and CSK. Michael is now the batting assistant coach as Chennai Super Kings while David is an assistant at KKR.

Albie Morkel and Morne Morkel have been part of title-winning teams in the IPL. Albie Morkel won two IPL titles with CSK while Morne Morkel lifted the IPL title with KKR in 2014. They have both been hugely successful in the IPL and also in the international circuit with the South Africa national cricket team.

Shaun Marsh is one of the rare cricketers who played for only one franchise during his IPL career. Shaun Marsh was picked by Punjab Kings in IPL 2008 and played for them until 2018 before parting ways. His younger brother Mitchell made his IPL debut for Deccan Chargers in 2010 and also Pune Warriors India in the next season. He was also signed by Rising Pune Supergiants in 2016. Mitchell Marsh was also signed by Sunrisers Hyderabad last season but was ruled out with an injury while he opted out this season.

Deepak Chahar and his cousin brother Rahul made their IPL debut for Rising Pune Supergiants one season after another. Deepak currently plays for CSK while Rahul plays for Mumbai Indians. Like the Pandya and Pathan brothers, Deepak and Rahul Chahar have also made their India debut in white-ball cricket.

(The above story first appeared on LatestLY on Apr 08, 2021 08:16 PM IST. For more news and updates on politics, world, sports, entertainment and lifestyle, log on to our website latestly.com).