With a T20 game being a 120-ball per side contest, every dot delivery is gold dust for the fielding side. However, keeping a batsman on the back foot for long is a daunting task in this format of the game. Nevertheless, there have been many bowlers in the Indian Premier League (IPL) who have kept the batsmen quiet for an entire over. 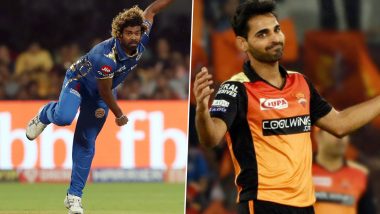 Cricket fans have their eyes on the calendar, with the VIVO Indian Premier League (IPL) 2021 set to get underway on April 9. The tournament will indeed be different from previous editions due to the restrictions and new norms amid the COVID-19 pandemic. However, one thing is sure that the battle between the bat and ball will keep you on the edge of the seats. With T20 stalwarts from all over the world plying their trade in IPL, most of the contests tend to go down to the wire. Although T20 is known to be a game for batsmen, bowlers also have a massive part to play. Most Ducks in IPL: From Rohit Sharma to Ajinkya Rahane, Five Cricketers Who Have Been Dismissed on Nought Most Number of Times.

With a T20 game being a 120-ball per side contest, every dot delivery is gold dust for the fielding side. However, keeping a batsman on the back foot for long is a daunting task in this format of the game. Nevertheless, there have been bowlers who have kept the batsmen quiet for an entire over. With the VIVO IPL 2021 right around the corner, let’s look at five bowlers with the most maiden overs in IPL history. Biggest Wins in IPL: Five Largest Victory Margins in History of Indian Premier League.

The former Indian pacer didn’t play IPL after the 2017 season but still holds the illustrious record of bowling most maiden overs. The right-arm fast bowler didn’t rely on pace much, but his ability to swing the new ball and nail yorkers at will made him a great asset in the T20 format. Praveen Kumar bowled 14 maiden overs in 119 IPL games for Royal Challengers Bangalore, Kings XI Punjab, Mumbai Indians, Sunrisers Hyderabad and Gujarat Lions.

Former Indian all-rounder Irfan Pathan is second on this list, bowling ten maiden overs in 103 games. Owing to his ability to swing the new ball, Pathan often opened the bowling for his side and kept the batsmen quiet in the powerplay overs. The former Chennai Super Kings bowler was also a potent weapon in the death overs. Not to forget, the southpaw a genuine all-rounder who hurt oppositions in all three formats.

Mumbai Indians pacer Dhawal Kulkarni comes third in this list with eight maiden overs in 91 games. The right-arm fast bowler is known for his accurate bowling through which he has troubled many destructive batsmen in IPL. He would be determined to add more maiden overs to his tally in IPL 2021.

Sunrisers Hyderabad fast bowler Sandeep Sharma also features in this list with eight maiden overs in 92 games. The right-arm pacer hasn’t been in talk much but has been performing consistently in IPL over the years. Sharma isn’t known to set the speed gun on fire, but his ability to move the new ball and bucket of variations makes him a captain’s delight.

Four bowlers have bowled eight maiden overs in IPL, but none of them had a better economy rate than Lasith Malinga, i.e. 7.14. The Sri Lankan speedster served Mumbai Indians throughout his IPL career and played a crucial role in guiding them to four titles. Arguably the best T20 bowler ever, Malinga had every weapon in his arsenal, required to torment batsmen. His tally of 170 wickets in 122 games is also the highest for any bowler.

Next on the list is Sandeep Sharma's SRH teammate Bhuvneshwar Kumar. The two-time Purple cap winner is a complete package in the T20 format, and his numbers speak for himself. His swing bowling doesn’t allow batsmen to take advantage of the powerplay overs, while his ability in the death overs keeps the scoring rate down. In total, he has delivered eight maiden overs in 121 games.

(The above story first appeared on LatestLY on Apr 08, 2021 11:12 AM IST. For more news and updates on politics, world, sports, entertainment and lifestyle, log on to our website latestly.com).