Buy IND vs SA 1st T20I 2022 Tickets Online: Here Is How You Can Purchase India vs South Africa Tickets for Match in Thiruvananthapuram

India would take on South Africa in a three-match T20I series, the first of which would be played on September 28. Read on to find out how you can buy tickets for the 1st T20I in Thiruvananthapuram. 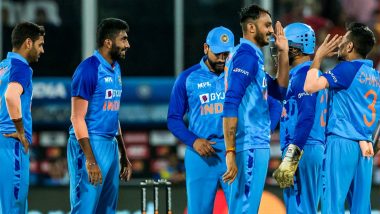 After a highly-entertaining series against Australia, India would now set their sights on performing in a similar manner against South Africa, against whom the Men in Blue will be competing in a three-match T20I series followed by as many ODIs. Rohit Sharma and his men clinched a record 21st T20I win in 2022 when they defeated Australia by six wickets in the 3rd and final match to claim the series 2-1. Beating the world champions is a big boost indeed but India would be eyeing to dominate South Africa as well, something which would give them a heap of confidence ahead of the T20 World Cup next month.  Virat Kohli-Rohit Sharma's Celebration Turns Into a Meme, See Funny Jokes Shared By Fans As Indian Stars Hug Each Other Following Series Win Against Australia

The first T20I between India and South Africa would be played at the Greenfield International Stadium in Thiruvananthapuram on Wednesday, September 26. Fans will once again flock to the stadium in numbers to watch the Men in Blue in action. Let us take a look at how to buy tickets for the India vs South Africa 1st T20I.

Tickets for the 1st T20I between India and South Africa have gone live and online booking of the same is available on  Paytm Insider. Fans, who are interested to watch the game live from the Greenfield International Stadium can log on to the website and purchase tickets for the series opener.

Tickets for some of the pavilions have already started selling out. The price of the tickets are Rs 1500 with some being priced at Rs 2,750.

(The above story first appeared on LatestLY on Sep 26, 2022 05:31 PM IST. For more news and updates on politics, world, sports, entertainment and lifestyle, log on to our website latestly.com).