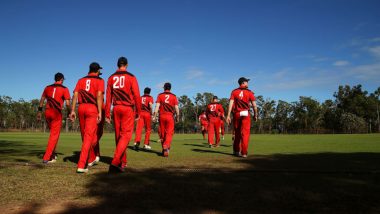 There is good news for cricket fans as the sport is finding its way back after the suspension due to the Coronavirus crisis. The competitive cricket in Australia returns this Saturday, June 06, with a T20 tournament. The CDU Top End T20, which will be played in a round-robin format, will end on June 08 with a total of 15 matches to be played in three days. What's more interesting is fans will also attend the games. ICC T20 World Cup 2020 Could be Held in New Zealand, Suggests Dean Jones.

Eight teams will take part in the T20 tournament. Sevens teams are Darwin Premier Grade clubs while the eighth team is an Invitational XI. The matches will be held at Marrara Cricket Ground, Gardens Oval and Cazaly's Oval, with a start time of 10 am and 2:30 pm local time each day. The live streaming online of the matches will also be provided on MyCricket Facebook page.

After the T20 tournament, Darwin & District one-day season will be held following weekend. The final of the 14-round competition will be played on September 19. "We have a unique opportunity to showcase Darwin's wonderful dry season to a global audience, as well as celebrate the return of cricket after a period of unprecedented disruption to the game," NT Cricket chief executive Joel Morrison was quoted as saying by cricket.com.au. India vs Australia 2020-21 Schedule, Free PDF Download: Get Fixtures and Venue Details of IND vs AUS T20I, Test and ODI Series.

"It's been a pretty tough couple of months for everyone around the world and we are hoping to bring some joy to the cricket community. We are open-minded and are quite happy to be a test case for world cricket," he added.

Cricket Australia (CA) recently released its schedule for the home season in which Zimbabwe, West Indies, New Zealand, Afghanistan and India will tour Down Under. Australia is also scheduled to host ICC T20 World Cup 2020 in October-November, but that is likely to be postponed.

(The above story first appeared on LatestLY on Jun 04, 2020 10:05 AM IST. For more news and updates on politics, world, sports, entertainment and lifestyle, log on to our website latestly.com).