England's Nat Sciver and Alice Davidson-Richards came up with the best-ever partnership for the sixth wicket in Women's Test cricket as the hosts took a morale-boosting 44-run lead on Day 2 of the one-off Test against South Africa at The Cooper Associates County Ground. 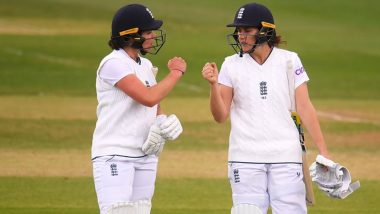 Taunton, June 29 : England's Nat Sciver and Alice Davidson-Richards came up with the best-ever partnership for the sixth wicket in Women's Test cricket as the hosts took a morale-boosting 44-run lead on Day 2 of the one-off Test against South Africa at The Cooper Associates County Ground. Sitting perilously at 121/5, England were probably one wicket away from disaster in the middle session on Tuesday, but the Proteas bowlers were unable to find a way to make the breakthrough to expose the home team's tail. Deepak Hooda, Umran Malik Shine As India Beat Ireland by 4 Runs in a High-Scoring Thriller to Win Series 2-0.

Joining Sciver was Davidson-Richards, who was watchful initially, scoring just nine runs in her first 45 deliveries, before loosening up with a boundary off the bowling of Nonkululeko Mlaba. Carrying on from the form earlier in the year at the ICC Women's Cricket World Cup that solidified her credentials as a world-class batter in the women's game, Sciver was in sublime form, hitting 15 boundaries in a maiden Test century. Davidson-Richards was equally aggressive, smashing 17 fours in her knock and bringing up a century of her own. The pair put on 207 before Davidson-Richards fell on the last ball of the day, a record for England for the sixth wicket and second only to Jodie Fields and Rachael Haynes' stand of 229 back in 2009, according to ICC.

Earlier, it looked as if South Africa had opened the door for an England collapse in the first innings as Anneke Bosch made early inroads. Despite coming on as a second-change bowler, Bosch was able to move the ball in the air as well as off the seam, trapping Tammy Beaumont lbw for 28 and beating the defences of Emma Lamb. After claiming both openers, Bosch tempted Sophia Dunkley into a drive with a fuller delivery, with the outside edge taken by Andrie Steyn. Bosch finished the day with 3/59 off 15 overs, and could well be the bowler entrusted to take an early wicket on day three. Ajit Agarkar, Former Indian Cricketer, Says Playing Ravichandran Ashwin, Ravindra Jadeja Together Will Depend on Edgbaston Conditions.

Following two tense draws to India and Australia in the last year, England's first innings at Taunton puts them in a strong position for a long-awaited Test victory. The big question though could be how they attack on day three, and how hard they want to push in the opening session through Sciver. Leading by 44 runs, Sciver will likely attack while batting, with Sophie Ecclestone and Kate Cross more than capable to hang around at the other end.

(The above story first appeared on LatestLY on Jun 29, 2022 11:28 AM IST. For more news and updates on politics, world, sports, entertainment and lifestyle, log on to our website latestly.com).